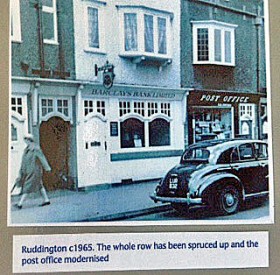 20th Barclays Bank and the ATM machine in the village will close.

This building has been the home of village banking facilities for 105 years having opened in 1905 as the Birmingham District and Counties Bank before becoming Barclays bank in 1916. Initially it occupied rented space and was “a bank office in the front room of a private house”. In 1957 the premises were purchased outright as a bank.

As society changed so did the services provided by this branch. Interestingly the first customers in 1905 were logged as a grocer, publican, builder and estate agent so maybe things don’t change so much?

In recent years financial services have changed with the increase in internet banking and an apparent associated decline in bank branch customers.

Locally this has been cited as the reason for the loss over the last few years of our other “walk in” banking amenities e.g. HSBC/ Midland Bank and Santander.

Thankfully as a community we have a Post Office and they will accept deposits into Barclay accounts. Customers have been advised how they will be able to do that. However a journey to West Bridgford or the City may be necessary for some services.

We also have a branch of The Nottingham. They returned to the village in 2013 after an 11 year absence, ironically to the building previously occupied by a bank!

In terms of future ATM access, currently there are machines inside the Co-op and Sainsbury’s and there is one on the forecourt of the petrol station on Loughborough Road.

On a personal level as the Treasurer of the “Friends of James Peacock” who have a Barclays account I would like to thank the staff of our branch and wish them all the best for the future.