Clement Dixon retired in September 1993 and, after seeing a notice at St Peter’s Church, applied to help with a project to rebuild and refurbish a girls’ school in Teso. Teso is an area in North Eastern Uganda and has a population of around two and a half million people.

Clement was selected to be part of a team of 11 and visited Uganda for the first time in summer 1994. In 1997, he returned with his wife, Honor, and over the past 25 years has visited Teso nine times. 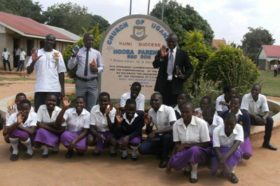 In 2000, Clement and Honor were introduced to the Parents’ School in Ngora, which is a secondary day school.  All secondary school education has to be paid for and, as most are boarding schools, this is very expensive for parents. The day school is therefore more affordable.

Over the last 18 years, Clement and Honor have tirelessly fundraised to help grow the school to what it is today. It now has 1,000 pupils, six classrooms, a very impressive Assembly Hall, a staffroom and water harvesting facilities. There’s also a dormitory housing 120 girls, complete with latrines and washing facilities, to provide safe accommodation for those unable to travel on a daily basis.

The school has now reached such a level of self suficiency that St Peter’s Church has agreed, in tandem with The Teso Development Trust, to assist in and support the growth and welfare of the Aminit High School, another embryonic Church and local community school in the same Diocese.

In 2016, two members of staff from James Peacock School, Sally Squires and Jayne Henson, accompanied Clement and Honor to Uganda. The Mustard Seed Project (Uganda) is now supporting a primary school and the local community on Tisai, which is an island in the middle of a swamp.

Summing up his Ugandan experiences, Clement said: “Lifelong friendships have been formed and we’ve found that cultural differences are less of a barrier than sometimes thought. One of the most pleasing aspects of our association with Teso and its people is the response by the congregation of St Peter’s Church, together with Ruddington folk in general, for their interest and enthusiasm in continuing the work.

“Over the years, their wonderful support for all our funding activities has been phenomenal and all our partners are most grateful.”