A recent announcement that Notts County Council is set to withdraw the 63 bus service from 4 August has been met with dismay by Ruddington residents. The 63 is currently operated by Paul S Winson and runs from Keyworth to the QMC via Ruddington and a number of other local villages. The service was introduced a few years ago to help improve rural links in the area.

But despite the 63 not being included in an official list of services earmarked for withdrawal, Notts County Council quietly announced on its website last month that it was to be axed. The news of its demise is just one of a number of service changes that will take effect from 4 August – and that, according to the website, have resulted from ‘extensive consultation’ with a number of parties, including local communities and passenger surveys. 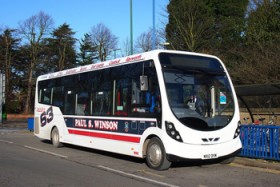 Unfortunately, as residents and bus users have pointed out, this ‘extensive consultation’ didn’t include the 63. Yet this is an important route, provides the only direct link to the QMC from Ruddington (a godsend for patients and visitors who don’t drive), a key commuter service to major employment sites including Ruddington Fields Business Park and the University of Nottingham, and links to several local schools.

Its planned successor, the 863, will comprise an off-peak shopping service, connecting East Leake, Wysall and Keyworth with the Morrisons supermarket at Gamston. Schools, hospitals and key employers will no longer be served and vital links between Ruddington and other local villages will be lost.

Ruddington Parish Council has objected to Notts County Council about the withdrawal of the 63 service and will keep residents informed of any developments on our website and in the newsletter.