Samuel was born in Ruddington in 1859, in a cottage that apparently stood where the current library is. In 1880, he moved to Guelph, Ontario, Canada, where he was a very successful hosiery manufacturer and Mayor from 1913 to 1914. He died there in 1944. 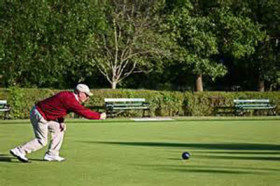 In the early 1930s, he offered to fund a recreation ground and swimming baths for his native village of Ruddington. At this time, public baths often also included washing facilities, i.e. baths, for those residents who didn’t have such facilities at home.

The proposal was to erect the baths on the Green but this met with opposition due to concerns around the effect of the Rights of Common Act and who would ultimately fund the baths’ operation.  After a couple of years of debate around costs, site location etc, the idea was abandoned and the emphasis was placed on the recreation ground instead.

Land was subsequently acquired on Loughborough Road, which was then levelled and turfed. A pavilion, tennis courts, bowling green and a cricket area were ultimately established. The costs were met from Samuel’s gift of £1,000 and a further endowment of £1,000. The frontage of the land was also sold off for housing development.

Samuel Carter returned to Ruddington in 1932 to officially open the facility and a plaque on the main entrance from Loughborough Road acknowledges his generosity. The park has changed over the years and several long-established residents of the village recall how it was the venue for the annual Village Fete that took place there from the 1940s onwards.

The tennis courts no longer exist, but the bowling green and cricket area remain  in regular use. The playground area has been changed over the years, with the latest update occurring in 2011. There’s now an inclusive roundabout and fitness activities, making the area accessible to all.