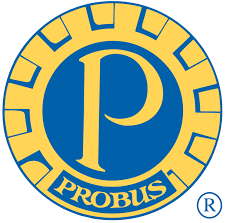 Probus is part of The Rotary Club, which pursues a policy of charitable fundraising from its members and the general public. Some years ago, it was decided that older Rotary Club members who no longer work shouldn’t be expected to contribute financially or physically to these activities.

As a result, separate Clubs were formed for PROfessional and BUSiness retirees, hence the name “PROBUS Clubs”. Each Club writes its own constitution, elects its own officers and arranges its own meetings, with no central organisational body. Ruddington and District Probus Club was formed in 1983.

The size of each Club was determined by the accommodation available, with the Ruddington and District Probus Club generally managing to accommodate around 50 members with a waiting list in the first 10 years or so. The Club met on the first and third Wednesdays of the month for lunch and to listen to a talk from external speakers or one of its own members.

Members of the Ruddington and District Probus Club ranged in age from mid-50s to mid-90s, with a wide range of occupations represented over the years. In the last 10 years of its life, the Club struggled to find officers, resulting in some members taking on the role of President more than once.

Eventually, the Club was disbanded after the 2019 Christmas Lunch. The dozen or so remaining members continue to meet informally for lunches.