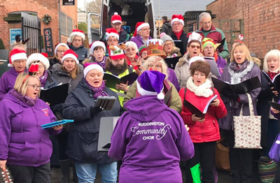 Ruddington Christmas Fayre was blessed with dry, clear weather on Saturday 21st December. And what a great day we enjoyed! As usual, there were stalls aplenty on the High Street, in St Peter’s Rooms, St Peter’s Church and the Methodist Church, with something for everyone.

Santa’s Grotto proved very popular once again. Later in the day, Santa made another appearance when he took a ride around the village on his sled, courtesy of the Rushcliffe Rotary Club.

St Peter’s Rooms saw Marvo the Magician captivate the children with his tricks and humour. Ruddy Duck was also popular with kids and adults alike – and almost found himself “hooked” at one stage by the Hook a Duck man!

This year’s Christmas Fayre raffle was held in aid of Ruddington Scouts. Thanks are due to the businesses and individuals who donated prizes, those who sold tickets and the kind people who purchased them. We raised a fantastic total of £447, boosted to £517.70 with monies from refreshment sales.

Thank you to everyone who contributed to a very successful day, especially those who gave up their time to serve refreshments, and to Sarah Julian of BBC Radio Nottingham who made such a great job of drawing the raffle.

With thanks to Paul Reedman and the Parish Council Events Team