He’s called Henry. He’s modeled on one of the stags in Wollaton Park. He’s the creation of Karen Mitchell who works at Julia’s Kitchen in Ruddington. AND he’s made of CAKE!

Not only that, he’s just won his creator a Silver award at the prestigious Cake International show in Birmingham. Her rather evil-looking, knife-wielding, grey teddy bear cake also won Silver! 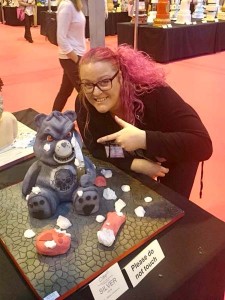 “I was completely overwhelmed when I realised I’d got Silver for both my submissions at Cake International, as there were over 1,200 entries this year” says Karen. “It was a very tough year for everyone who entered with so many cake artists from all over. It took me 70 HOURS to create the stag from rice crispies and modeling chocolate – but all my hard work paid off!”

Karen’s only been working at Julia’s Kitchen for just over three months but has already got to know many of the locals. “Ruddington is such a beautiful place to work. Even other local businesses pop in for a cake and a chat. It’s such a warm and friendly place with lovely people”.

She’s been making cakes as a job for just a little over 18 months but started her foundation for this when she left school in 1989 and worked as an apprentice cake decorator for Dawson’s Bakery in Sneinton Dale. She hails from Bilborough, but has lived in Kimberley for 19 years, and now has four children and two grandchildren.

If you’d like to see Henry the Stag ‘in the chocolate’ he’s currently on display at Wollaton Hall. Meanwhile, of course, Karen’s many other custom cake creations are constantly coming to life in Julia’s Kitchen on Church Street!

“I’m hoping to push myself even more for Cake International next year” says Karen. We wish her continued success!