A tank on the High Street?

We’re all now familiar with Rushcliffe Country Park as a recreational facility, but years ago, it was literally a very different place.

During the Second World War, the area housed an Ordnance and Supply Depot. Just after the war, the site was used for Ordnance Storage and Disposal. Then in 1946, they began to hold auctions to sell off surplus war equipment, including cars, heavy machinery, motorcycles and miscellaneous items like boots, binoculars and even razor blades! 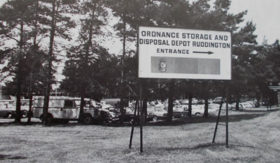 The auctions attracted buyers from all over the UK and abroad. Whilst the sales were on, the village was a hive of activity with goods and buyers coming and going. Apparently two cars used in the Great Train Robbery in the 1960s were bought at one of the auctions!

35 years ago, on 13th June 1983, the last auction was held. It went on for five days and more than 2,300 vehicles were sold. After that the area was left unused until work began to create the Country Park we know today.

P.S. “Bombs to Butterflies,” edited by Margaret Lawson, is a great book that charts the history of this area of the village.