Ruddington is welcoming another addition to its High Street. Phoenix Flowers is now in residence at the site of the former Bluebell Flowers, run by new owner Sally Pickard.

A florist for 12 years, Sally was looking for a permanent base and was delighted when the premises became available as she knows Ruddington well through her involvement with the Brownies.

The shop was officially opened as part of the village’s Christmas event and Sally was overwhelmed by the positive response she received. 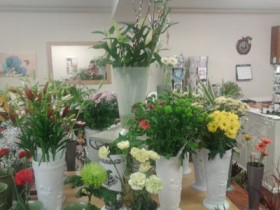 “We’ve given the shop a makeover and it’s now lovely, light and bright,” she says. “We opened late on the day of the Christmas event and people dropped in for tea and a look around and we had lots of really nice comments and feedback.

“We offer a full range of floristry services, so whether you need some flowers for a gift or would like us to prepare the flowers for your wedding, or a funeral, we can offer you plenty of advice. You’ll also find some lovely giftware in amongst the flower displays!”

Joined by her colleagues Stella Robertson and Elaine Jones, Sally is looking forward to 2015 and bringing her expertise to even more Ruddington residents in the shape of her ‘have-a-go-at-floristry’ courses, which she’s running on 10, 15 and 17 January. Each two-hour course is aimed at showing people how much fun flower arranging can be – so whether you’ve tried your hand before or are a complete novice, you’ll be sure to enjoy creating your own floral handiwork.

Phoenix Flowers is open Monday to Saturday from 8.30am-5pm (3pm on Wednesdays and 6pm on Fridays). To get in touch or find out more about joining a course, contact Sally on 0115 921 2300 or email phoenix.flowers@yahoo.co.uk