– I’m not sure which is seen as the less likely to happen in today’s society. However, I know from experience that neither is as rare as people are led to believe. 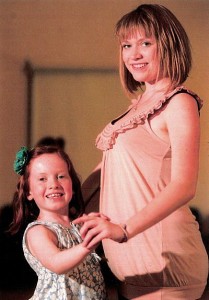 Becky is pictured with a young dance pupil

I’ve been living with arthritis for as long as I can remember, for some people this is difficult as they think arthritis doesn’t affect young people. It affects people of all ages and in some respects it’s harder for younger people as they don’t just have to deal with the pain but also a lack of understanding.

Dancing is a passion of mine. I’ve been learning Latin American and Ballroom at Claire Hall’s School of Dance for over 12 years and I love it as much as when I first started. I now help teach the younger girls and am working towards my teaching qualification. I’m also involved in guiding. Girlguides have given me so much. I started as a rainbow and now I’m a ranger. In addition to Rangers, I help at Brownies as a young leader meaning I get the enjoyment of helping one of the many Brownie packs in Ruddington. Through Girlguides, I’ve been lucky enough to represent Nottinghamshire in a trip abroad and help at international events meeting new people from all over the world.

Over the last 5 years, I’ve volunteered as a member of Rushcliffe Youth Assembly and County Youth Assembly which has allowed me the opportunity get involved with the Young People’s Board for Nottinghamshire meaning that for issues involving young people I am able to get my voice heard. The funny thing is, all these things that I do for fun have earned me a nomination in the Nottinghamshire 4UTH Awards. ……………….  (Written by Becky Howie)