James Peacock was born in Ruddington around 1585 and became a very successful leather trader in London. Dying childless in 1641, he willed his estate to various good causes including the foundation of a school called the James Peacock’s Free School, in his birthplace.

The original school (a wood and thatched farmhouse on Church Street) taught boys and girls for over 200 years. It was funded by rent from farmland included in the Peacock Endowment which in 1891 was sold to Philo Mills of Ruddington Hall for £5,570. 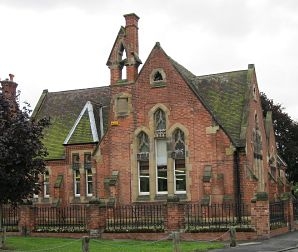 This original building was replaced by a purpose built brick building on Asher Lane in 1875 which is now Adlard Print & Reprographics Ltd (pictured left). Boys and girls were later separated and the girls moved to the building now known as St. Peter’s Rooms. The school continued to change over the years becoming a Junior Boys’ School and then merged to form a mixed school known as St. Peter’s Junior School. It closed in 1973 and all pupils were transferred to premises on Ashworth Avenue.

To perpetuate the name of James Peacock, the infant school in Manor Park was named after him.