If you arrived in Ruddington after 1998 you may not even be aware that there was once a blacksmith’s shop right in the centre of our village?  Well, in fact, at one time, there were FIVE! Oliver James Blood is now 85 and still lives with wife Vera in the house they had built next to his former forge on Church Street.  In this first half of a two part feature on his life he reminisces with us about his early years in the village – and how his dad first entered the trade. “We’ve got records of our family making a trip to America from Ruddington in 1648, so we’ve had Bloods in the village for at least THAT long” says Oliver.  “My father was born in 1896 and worked as a farm labourer until he was about 15 or 16.  One day he took a repair job to Fred Topley’s Smithy on The Green (pictured left).  He had two forges in that building.  Whilst he was waiting Fred told him that he was looking for an apprentice to work with him.  My father accepted the job, left the farm, and that’s when the Blood family went into the blacksmith’s trade.”

Four years later his newly acquired skills were put to good use in the First World War when he went into the army as a ‘shoeing smith’.  Oliver continues “Then, once the war was over, father went back to work at Topley’s Smithy until Fred died in 1932.  By this time dad was ready to take over the business – competing for trade with two other general smithies in Ruddington; one on Charles Street (Joe Allsop’s) and another at the top of Kempson Street; as well as two ‘framesmiths’ who specialised in making and repairing textile frames.”

The teenage Oliver Blood didn’t follow in his dad’s footsteps immediately but first spent a couple of years engineering in Nottingham before starting his apprenticeship in the trade.  He began working with his dad at the Smithy on The Green just as World War Two was breaking out.  At this stage they started getting military work from the new Ruddington Depot at the southern edge of the village.  The army had appropriate workshops and stores, but it would have been too dangerous to have a smithy on site.  So when repairs were needed to articles made of steel, or if metal parts needed replacement, the work was contracted out.   Oliver recalls  “I used to make rings of 1 inch steel that were between 3 and 4 inches in diameter. I believe they were used on the chains of the cranes that lifted the bombs.”  These rings slipped down the chain and were hooked onto lugs on the bomb cases.  As they weighed 1000lbs the rings took a lot of strain and needed regular replacement.  Chisels and other tools were sharpened under contract at the smithies in the village. This was another operation likely to produce sparks and so too dangerous to carry out at The Depot. 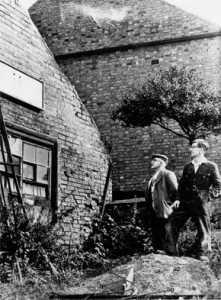 Oliver Blood (on right) with his father

Blood’s Smithy continued its business on The Green for another fifteen years after the war, despite having no electricity, only hand blown forges and just gas lighting for the shorter winter days.  Shoeing horses provided a good trade at first along with farm machinery repairs and forging metal tyres for the wooden wheels made and repaired at the wheelwright’s shop on Distillery Street (on the site of what is now ‘Keyworth Garage’).  In the early 1960s heart trouble forced Oliver’s dad to retire, leaving his son to continue the business alone.  But then there was a problem – the landlady of the property was unwilling to hand over the tenancy of the workshop from father to son without him also renting the adjoining house!  “So we had to get somewhere else I could continue to work” says Oliver.  “By now the farms around Ruddington were dying so we tried to find an old farm building to convert.   This didn’t work out, but they’d just demolished two old cottages on Church Street and said they’d give me permission to build a new blacksmith’s shop on the land there, right in the middle of the village, so that’s what we did!” And so the new OJ Blood workshop most of us still remember, opposite The White Horse Pub, opened for business in 1963.

The wrought iron gates at the old Horspool’s Bakery, the giant pagoda at Lymn’s Funeral Directors and dozens of customised weather vanes – just some of the work of Ruddington’s best remembered blacksmith, Oliver James Blood!  He is now 85 and still lives with wife Vera in the house they had built next to his former forge on Church Street. 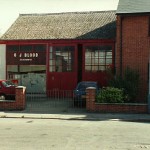 The “new” forge on Church Street

In this second half of a two part feature on his life he reminisces with us about the opening of that larger forge in 1963 and the many creations from his workshop. “When it first opened we still lived in Clifton and the house you can see in the photograph wasn’t built for us until the eighties” says Oliver.  “So originally the workshop was even wider than that!  Because we’re in a residential area we could only get planning permission to do all our work inside, to reduce noise for our neighbours, which is why the building had to be so big.”

At this stage he recalls they were still doing some farm implement work.  As time went by the development of larger, more advanced farm machinery on fewer farms meant that Oliver had to find new, smaller lines of work to keep his forging business going – and decorative wrought iron work was becoming more and more popular. He launched a catalogue of possible designs. Horspool’s Bakery commissioned him to make some new wrought iron gates, which are still in place today, whilst the photograph (below right) shows him making the roof of a pagoda for Lymn’s Funeral Directors. 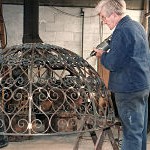 His fame soon spread far and wide: “I think it was Central Television who asked me to make them a plaque for a place in Shropshire they’d just awarded the ‘best kept village’ prize to.  I decorated it with acorns on the corners – which luckily turned out to be perfect as they placed it under a big old oak tree there!  But I’ve still never been across to see it.”  His work can also still be enjoyed in mainland Europe and the USA. “The last big job I made was closer to home – an ‘altar rail’ for Bunny Parish Church.  It was done in memory of the Oliver family.  They were farmers so I decorated it with milk churns and other farm tools, as well as all their initials.”

Oliver retired in 1998, at which time his big workshop was dismantled and a more modest, domestic garage put in its place.  He says some of the cheaper ironwork he sees around the place these days makes him cringe – not usually proper ‘wrought iron’ nowadays but flimsier stuff bent into shape and just electric welded together: “But I suppose people buy what they can afford….”

To this day Oliver Blood can still be seen around our village – most often at the Methodist Church displaying his skills as a most accomplished organist of many years standing.  “It’s just another way of working with my hands” he says.  “I’ve had plenty of practice!”