The history of a family and its business 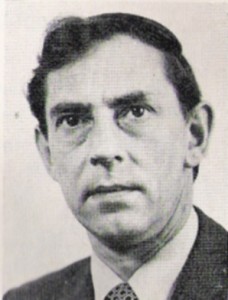 David as a Parish Councillor in the 1980s

For 64 years, Oliver’s Butchers on Church Street was one of the mainstays of Ruddington life and David Oliver’s retirement in January 2000 was seen by many as the end of an era. Now aged 71, David was born in the rooms above and behind the butcher’s shop and lived there until 1998. He now lives with his wife Marion in a house on Easthorpe Street that was previously owned by his uncle, Frank Oliver.

In the first part of this three part feature on his life and wider family history, David traces the Oliver family’s rise to increasing prominence in Ruddington through the establishment of several thriving family businesses, including what was to become his own butcher’s shop.

Olivers arrive and make their mark

The Olivers are one of our village’s oldest families, establishing themselves here when Thomas Oliver moved from Market Bosworth to Ruddington with his wife Mary in 1744. He started a bricklaying business which ran for 255 years until 1999, providing gainful employment for many Oliver sons and daughters along the way. Thomas died in 1777, leaving £80 in his will – quite a tidy sum in those days.

Producing a detailed family tree showing many generations of Olivers, David muses on aspects of the bricklaying firm’s history. ‘Unusually, it was run by a woman for 36 years – from 1886 to 1922. The lady in question was Emily Oliver, widow of another Thomas Oliver. She gained quite a formidable reputation as a matriarch in her time! Several of her 14 children also went into the business, with a lot of the work coming from (Ruddington landowner) Philo Mills’ various estates. Philo promised Emily at her husband’s graveside that work would always be available on his land if hard times befell the Olivers, and he stayed true to his word.’ 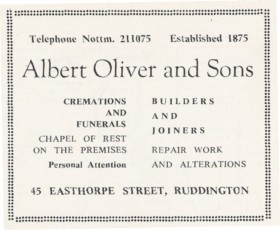 Advert in the 1960s Guide to the Village

As well as the bricklaying business, the Oliver family also ran a smithy that later became O J Blood’s (O J Blood’s predecessor, Fred Topley, was married to an Oliver) and a funeral service that passed to A W Lymn in the 1990s.

A more unusual business venture was that of Alfred Oliver (1868-1943) who had an artist’s studio in Gordon Lodge on Easthorpe Street. Alfred’s pictures are now considered fairly valuable, selling for up to £10,000. One of his works, a water colour of the Red Heart pub, pictured further down the page, remains in the village.

‘My father, Thomas William Oliver, known as Bill, took on the butcher’s shop on Church Street in 1935,’ says David. ‘We stayed in the same premises throughout our time there, and it’s still a butcher’s today (Ruddington Village Butchers Ltd). Another Thomas Oliver actually started the business in 1880, but sold out to the Suttons in 1890 when he moved to Bunny to start a cattle dealership. 45 years later, Dad brought the butcher’s shop back into the Oliver fold and I started working there full-time in 1955 when I was 15.’

The 15 year old Oliver was no stranger to the daily routine of life as a butcher – he’d been working in the shop part time since the age of 11 and slaughtering beasts from the age of 12. ‘We did all our own slaughtering in those days,’ remembers David. ‘Like all butchers at the time, we bought our animals alive and slaughtered them ourselves, either in our own slaughterhouse behind the shop or, in later years, at the abattoir at the Co-op.’ In fact, slaughtering was such a big part of the butchery business in the 1950s that three other men helped with the slaughtering work at Oliver’s, besides David and his father. Most of the cattle and sheep came from local farms, most of which are now long gone. Says David: ‘We used Stanley Marsh on the other side of Loughborough Road, Carnell’s and Randalls of Bradmore, Jack Small of Thrumpton and John  Shepherd’s at Gotham. Some of our lamb also came from Plowright’s at Barton in Fabis. Dad and I would go out on Sunday mornings and inspect the beasts to see which ones were ready for the chop!’ Oliver’s had to close their slaughterhouse in the 1950s as it was considered too near to residential buildings, but Bill and David continued to slaughter their own stock at the Co-op abattoir until it closed in the early 1980s.

In the 1940s and 50s, Bill developed an interesting sideline to the business by offering a castration service for young cats and pigs. David explains: ‘There was no vet for miles around, but animal owners wanted to keep the population of cats and pigs down. So they’d bring them to our slaughterhouse to be “done”! It might sound a bit barbaric now, but none of the animals Dad treated ever had any problems. He used home-rendered lard as an antiseptic, which worked really well to prevent infection.’ 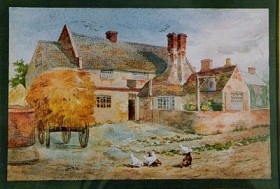 Post-war life as a butcher

Wartime rationing continued into the early 1950s, and the sale of meat was restricted to one shilling’s worth per person. To supplement their diet, many people in Ruddington kept their own pigs. These were kept anywhere there was space, often at people’s homes or on their allotments, until the animals had been fattened up. At Christmas, David’s father, Thomas ‘Bill’ Oliver, would slaughter the pigs, de-bone them, cut them up and salt them before returning them to his customers. The salting, or curing, process took several weeks. As well as common salt, salt petre was also put into the spaces where the bones had been. 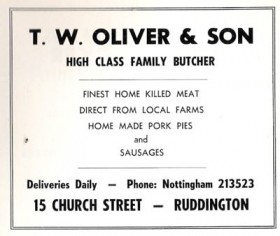 Lack of storage space sometimes proved a problem, as David recalls: ‘Pigs then were much bigger than they are now, so you needed a lot of space to cure the meat. One Christmas we slaughtered 38 pigs and we didn’t have enough room for all the meat in our cellar. So we stored the rest in other people’s cellars around the village that they’d agreed to loan out.’

Once the cured meat was returned to the customers, it would be hung up in the kitchen or another airy place, often wrapped in muslin to keep flies away. The circulating air would help stop the meat going off and, in time, would also have a hardening effect so the meat would need soaking to make it cuttable before being cooked.

During the 1950s, most of the meat sold at Oliver’s came from cattle, sheep and pigs. Chicken was less important as many people still kept their own hens, but in the late 1950s, turkeys started to become popular. Pork products were a cornerstone of the business, with two people employed to make sausages. And pork pies were made on the premises until the mid-1980’s to a recipe developed by David’s grandmother, Elizabeth, during the Second World War when she ran the shop whilst Bill was in the army. In the 1950s, Oliver’s employed up to 10 people to work in the shop and slaughterhouse and to make deliveries.

Before the days of refrigeration, the trays of pre-cut meat that we’re now so familiar with were unheard of. Instead, the meat was always cut in front of the customer and to the customer’s exact specifications. ‘We had refrigeration installed after the war,’ says David. ‘Before then, the Nottingham Ice Company would deliver ice to us twice a week and we’d keep the meat in the large, walk-in fridge that’s still there. After we had refrigeration, we were able to start displaying meat in the window and under the counter, like they do now.’ 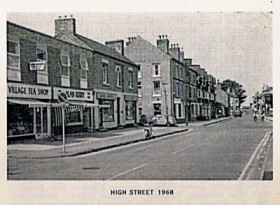 As many people didn’t have a fridge or a freezer at home, they had to buy fresh produce much more often than they do now. Housewives would set off to the shops at least every other day to buy meat and other essentials. However, many people liked their food to be delivered, and David remembers making endless rounds of meat and egg deliveries by bicycle in the early part of his career. ‘Very few people drove to the shops back then. In fact, there were very few cars in Ruddington at all. Most people walked to the shops and there was a much wider selection than there is now. We were just one of three butcher’s shops in the village, not counting the Co-op. Amongst other shops, there were three grocers, a number of greengrocers, two barber’s shops, a chemist and several chip shops. The Co-op on Church Street was still a proper department store, with four departments all self-contained and no self-service until 1959.’ 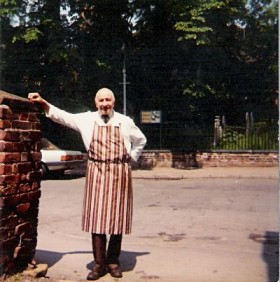 These were the days of personal service, when shopkeepers knew their customers by name and served them individually – and there was no rush to get the shopping done quickly. In today’s self-service environment, butchers’ shops are one of the few places that traditional face to face retailing still takes place.

From the early 1970s onwards, the butcher’s trade evolved in new directions as healthy eating became more popular and people’s tastes in food started to change. ‘In the old days, people would eat fat, but they started wanting lean meat instead,’ recalls David.  ‘That led to a change in the types of cattle being used for beef, from the typical Friesian/Hereford cross to the French breeds that give much leaner cuts.’ Sales of chicken and turkey, seen as healthier options than red meat, were also rising, especially as fewer people now kept their own poultry at home. 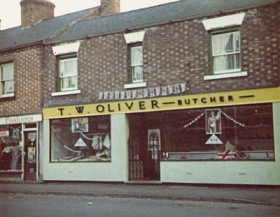 As more people began taking holidays abroad, they became interested in foreign food and David’s customers often sought his advice on how to cook new recipes. Oliver’s began issuing recipe pamphlets to help people recreate the dishes they’d enjoyed on holiday or had seen on the new television cookery programmes.

Daily life at Oliver’s changed forever in the early 1980s when the Co-op closed its slaughterhouse on Church Street. With no local abattoir facilities, David had to stop buying live animals and turn instead to the wholesale market. ‘We lost much of our product choice and flexibility when we started buying from wholesalers,’ says David. ‘Bartering for livestock had been a big part of our lives, and Dad and I were used to choosing each animal ourselves. Working with a wholesaler was quite different – often we didn’t know which farm the meat had come from, and there was very little room to negotiate on price.’

The end of an era

Oliver’s continued to do a brisk trade until 1999, when David decided to retire. The business was taken over by long-term employee Robert Warner, who ran the shop until 2010. David and his wife Marion are both still very much a part of village life and David can often be found practising his long term hobby of bell-ringing at St Peter’s Church. With one of their daughters and various other family members still living in the village, the Oliver dynasty is set to continue into Ruddington’s future. 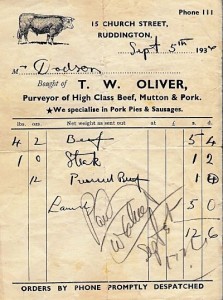 This Oliver’s bill dates from September 1936, just one year after David’s father Bill took over the butcher’s shop. It is written out to a longstanding customer who, as David recalls, received an almost identical order each week. ‘Mr Dodson was a farm labourer who worked for Machin’s in Ruddington. He earned 30 shillings a week as a waggoner so, as you can see, he spent almost half his wages on meat for the family every week. The pressed beef referred to on the bill would have been pre-cooked cold meat that people used to buy in the days before tinned food.’

It is interesting to compare the Dodson family’s spending on meat with today’s trends. According to the Office of National Statistics, the average weekly wage for a full-time male employee was £538 in April 2010 – and the average household expenditure on meat and fish was just £13.70 a week. That’s less than 3%!