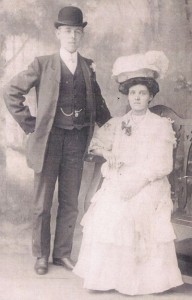 Reuben (senior) and Catherine Grice lived at 12/14 Wilford Road where “Grices” are today and established the business in 1909 selling and repairing bicycles and even mending vehicles from the MOD during the war years. There was a penny farthing at my grandparent’s house which I can remember as a child and I also remember the house as a very big, three storey, rambling place which during the war was also home to evacuees.

Reuben and Catherine had 3 children, Harold, Reuben junior (my father) and Mary, and eventually they moved the family into a house further down Wilford Road leaving the original premises for the business to continue. Apart from the business, Reuben (senior) played professional football for Notts County and made four appearances in 1911 for £8 a week. He moved on to play for Rotherham and then Burnley where he scored 40 goals and won 6 gold medals in 1912. His son Harold also played football, along with cricket and tennis, and daughter Mary played tennis and then joined the WRNS. 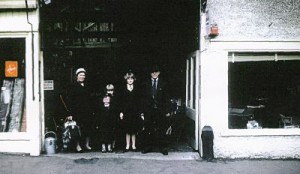 The garage on the hill

My father, Reuben junior, followed in his father’s footsteps and played for Forest Reserves in the 1920’s and 30’s, winning various medals as a semi-professional. The business became R. Grice & Sons Ltd and he introduced a petrol pump with a hose that swung out over the hill to fill up the few cars that were around in the 30’s and 40’s. Today, the business is run by Tony and Steven, whose father Peter was Harold’s son; so it is still very much a family business and celebrated its centenary in 2009.

My Mum, known to everyone as Nancy, was born in Great Missenden, Buckinghamshire and the family moved to Ruddington when she was 6 months old. Her parents (my grandparents) were Frederick and Mary Goode, and home to Nancy and her sister Alix, was Grange Cottage which is now a children’s nursery. Mum’s father, Frederick Goode, was a railway worker, a regular churchgoer, served on many local committees and was a much respected gentleman in Ruddington. There were several moves although they stayed within the village where Mum was a regular at St. Peter’s Church and attended the girls’ school which is now St. Peter’s Rooms. A keen tennis player, she was also a member of the Girls Friendly Society, played the piano and learned Pitman’s shorthand at Millers Business College.

Dad regularly attended the Baptist Church and was a pupil at the boys’ school on the Green.  His young life was filled with his love of football, cricket, tennis and the business, and I wonder whether it was their mutual love of tennis that brought them together at the Paget tennis club at the back of the Village Hall. They married in 1939 and honeymooned in Bournemouth. 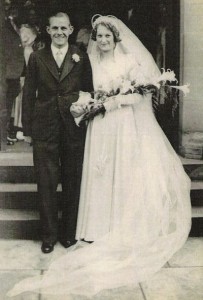 Setting up house in the village, their rent was 14/9d without a garage or 17/6d with a garage – needless to say, during the difficult war years they went for the cheaper option. In July 1942, I arrived on the scene and I was baptised on 27th September of that year. My sister Helen Elizabeth arrived in March 1947 and in May 1951 my sister Mary Anne was born. Mary arrived in a “blaze” of glory as Dad managed to set the chimney on fire as Mum was in labour. All three of us attended local schools and we enjoyed a very happy and loving family life despite the difficulties of post war years.

In 1953, the house we lived in was put up for sale for £800 to sitting tenants but the family decided to move to pastures new. Their new house, still in the village of course, cost £1,850 and the 25 year mortgage cost £9.00 per month – this was a huge slice of the family’s income of around £5.00 per week. We were fortunate that we had friends who had moved in to the house next door and I remember that we girls were able to enjoy a bowl of spotted dick pudding whilst our parents moved all their goods and chattels.

As children, we were active members of St. Peter’s Church and attended 3 or even 4 services on a Sunday. Helen and I went on to become Sunday School teachers and we were all involved with GFS, Brownies, Girl Guides, elocution and piano lessons. Mum always sat in the same pew, seven rows from the back left hand side; a tradition which we carry on today. She was also an active member of the Young Wives Fellowship, Mothers’ Union and Women’s Institute and enjoyed a mean game of whist and solo. On Saturday’s, if Mum was at a Whist Drive, Dad would take us to “Fifty Steps” or the railway station to see the “Master Cutler” steam train at around 8.50pm and if we were good we were treated to a bag of chips on the way home. 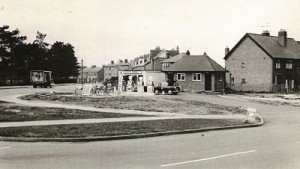 Grice’s garage at the corner of Clifton & Wilford Roads

Dad was a keen member of the Bible Students (Baptist origins) which was held at the YMCA and sometimes took us along with him. He was very astute and read his Bible every day and we children remember him kneeling by the bed in the evening to say his prayers. He played the piano very well, recording the hymns from the 100 best hymns on the radio which we still have today and we enjoyed family sing-songs around the piano. His other leisure pursuits included walking and he was a keen member of the Ramblers’ Association. Sometimes he walked for miles and would visit friends and relatives in Mapperley and even Woodborough. On occasions, Mum would have to pick him up in the car when he’d walked too far. On another occasion, he met two Australian girls whilst walking in Derbyshire and brought the bedraggled pair back home to get dry. Mum gave them dinner and they ended up staying in our caravan in the garden for two weeks. After their return to Australia, they kept in touch until Mum died in 2004. 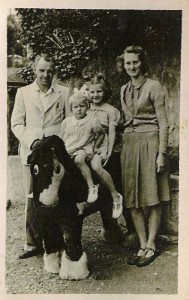 Their love of tennis continued throughout their lives, regularly taking us to Wimbledon and Mum even became Vice President of the Lawn Tennis Association. Dad was a keen gardener and took pride in his very large garden, growing all sorts of fruit and vegetables for the dinner table. Family holidays were spent in Bournemouth and we girls have many happy memories of times there. Mum and Dad also had many good, lifelong friends in the village and some of the surnames are well known even today – Dring, Gutteridge and Horspool to name a few. There are too many friends to mention in this small article but you know who you are and we thank you for the memories we have.

In 1959 Dad decided he would take us all on holiday touring the Continent and we travelled through 8 countries in two weeks. He was determined that we should all see as much as possible despite our car sickness! The tent blew down several times and we had mice in the car engine and lizards in the tent, so from the next trip onwards we had the luxury of a caravan for our holidays abroad.

In 1965 I married James Lyon of Buckinghamshire and eventually settled back in Ruddington where we raised our sons Andrew and Paul. Helen married Roger Milns in 1968 and has two daughters, Joanne and Caroline, and in 1972 Mary married John Prest and has a son David and daughter Claire. All of us were married at St. Peter’s Church in Ruddington. Our lives have been happy and secure and we have enjoyed many family parties to celebrate everything from Christenings to Mum and Dad’s Silver Wedding in 1964 and Ruby Wedding in 1979.

Dad died in 1983 and claimed to have had a good life spanning three score years and ten. Mum threw herself into village life – church meetings, Whist Drives, Solo Droves, TAG, Mother’s Union and Women’s Institute. We three girls and Mum would often go out for lunch and it became a tradition for the “Girls Aloud” or “Four Musketeers” as we were sometimes known, to be seen out and about together. She had many friends and family around her but sadly lost her fight for life in 2004. Her eulogy was given by my son Andrew for his much loved Grandma. 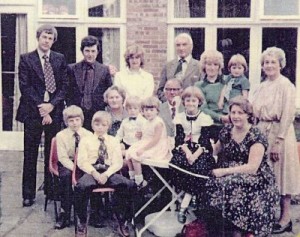 One thing is for sure, our memories will live on forever as they will for many more who knew these two very kind and special people. If ever we want to be nostalgic, we can visit Rushcliffe Country Park where we decided to commemorate a seat in their memory and we have spent many happy times there since reflecting on the happy times we had. 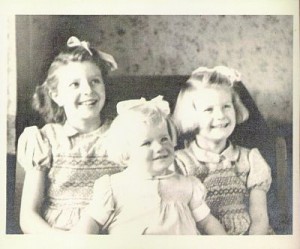 It is with great sadness that I have to report the passing of another Ruddington family business away from our village, along with Horspool’s, Phethean’s, Oliver’s, Hind’s, Dolman’s and Butler’s which were all established at the turn of the 20th century. I can remember with nostalgia as a child playing with my sisters upstairs with the penny farthings – boneshakers which were at the home of Reuben Senior and his family. This 3 storey house was said to be possibly an old manor house and had a row of houses at the back, possibly for servants. A cousin of mine has just recently said she was told the small room at the top was a ballroom which might suggest this was indeed true.
LONG LIVE THE GRICE NAME 101 YEARS IN RUDDINGTON (1909-2010)