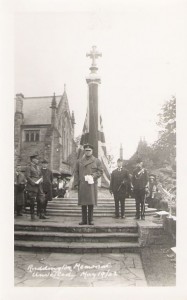 This page is about the history of our War Memorial. To read the Roll of Honour and details of our annual Service of Remembrance, please click here.

The War Memorial in Church Street, Ruddington, is the focal point for a service organised by the Royal British Legion and held on Remembrance Sunday each year. The Memorial commemorates the 89 men and one woman from Ruddington killed in war.

When the First World War ended in November 1918 it was considered to be the ‘War to end all Wars’. When the final casualty figures were recorded it was found that in all there had been some 10 million dead and 30 million missing or wounded.

After 1918 every village, town, city and church, and many schools, universities, clubs and places of work had a Memorial to commemorate those who had died for their country and Ruddington was no exception. 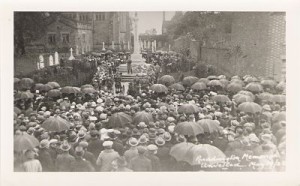 View of the crowd at the unveiling

As early as May 1919 a special meeting of Parish Councillors was called to decide on a suitable Memorial to honour 61 men from Ruddington who were killed in the Great War. It was thought that a suitable Memorial would be an Institute and Reading Room, to be paid for by public subscription, but this idea was rejected and discussion continued until October 1922 when the Ruddington Parish Council Minutes record that a contract was drawn up between a Mr. Sutton and the Ruddington Parish Council for the conveyance of land at the side of the churchyard to be used for the site of a War Memorial. 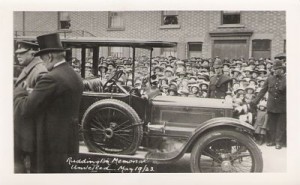 The Duke of Portland

It is thought that a firm called Barons from Derby were responsible for the construction of the Memorial but how the money was raised is not clear. The Memorial was unveiled by the Duke of Portland and dedicated by the Reverend Hayman on Saturday 19th May 1923. The Unveiling Ceremony being preceded by a parade through the village supported by the 42nd Nottinghamshire (Boots Troop) Boy Scouts Silver Band accompanied by massed choirs. Many people in the village remember this occasion which was well recorded on photographs. 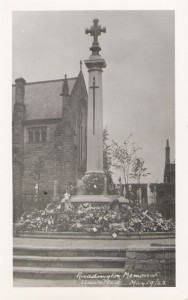 After the official opening, records show that a Committee of Councillors to be called the War Memorial Committee, was formed and in October 1923 they agreed to employ a Mr. A. W. Cross at a rate of one shilling and three pence per hour (approximately 6p per hour) to keep the Memorial tidy and to assist him the Council brought a second hand lawn mower at a cost of £3. 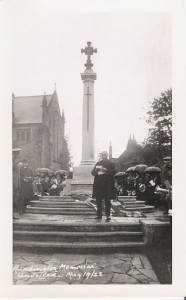 September 1939 saw this country at war once again and at the end of the Second World War, 28 names were added to the War Memorial including one woman, although it is not clear who arranged for these names to be placed on the Memorial and how the cost was met.

Flood lighting was installed in the 1950s the cost being met by an anonymous person in the village.

The last name to be added was that of George H. Beith who was killed in the Korean War in 1951. His name was inscribed on the Memorial in 1987, the cost being defrayed by an anonymous donor and the dedication service arranged by the Ruddington & District Royal British Legion..

The above photographs are reproduced with the kind permission of the Ruddington Branch of the Royal British Legion. All photographs bear the inscription “Ruddington Memorial Unveiling May 19 / 23.”

Editor’s note: The Parish Council received an email from Sarah, the granddaughter of Walter  North, who took the photos above. Sarah gave us some background to her grandfather. ‘Walter was born in Ruddington in 1877 and lived there until about 1905 when he married and moved to Hucknall. He was a keen photographer and took photographs of local events around the county, many of which he reproduced as postcards.’ 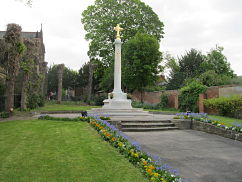 Cadets from 2425 (Nottingham Airport) Squadron ATC and Ruddington Detachment Army Cadets took part in a unique event exactly 90 years after the memorial was first unveiled and dedicated on 19 May 1923.The Cadets paraded the Royal British Legion Standard together with their own Standards at the memorial and then formed a guard of honour outside St Peter’s Church, as Councillors and members of the public entered the church for the Thanksgiving Service. 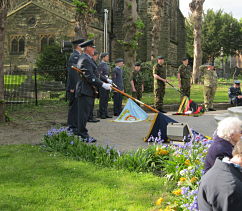 Reverend Andrew Buchanan conducted the Re-dedication and Thanksgiving Service. The Last Post and Reveille was sounded by Mr P Webster. The congregation included about 100 members of the general public together with members of the County and Parish Councils and members of the Ruddington and District Branch of the Royal British Legion(RBL). Family members of at least two WW1 casualties were also present.

The restoration work came about after an inspection undertaken on behalf of Ruddington Parish Council found that weather damage and general wear and tear over the years had taken its toll. The Parish Council made a successful application for funding from the Nottinghamshire County Council Local Improvement Scheme and local stonemason Mark Stafford was appointed to undertake the work.

Shortly after the restoration started in March 2013, the Ruddington and District Branch of the RBL realised that the 90th Anniversary would be in May. Every year on Remembrance Sunday, the RBL organises a service at the War Memorial when many villagers turn out to pay their respects and remember all who gave their lives for our freedom.  With the support of the Parish and County Councils, the RBL went ahead and organised the short ceremony which took place on Sunday 19th May 2013 to mark the 90th Anniversary. 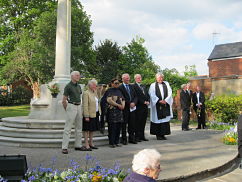 Due to the poor spring weather conditions the work took longer than expected and it was only completed on Friday 17th May. Thanks must go to all parties involved in making sure that the re-dedication went ahead.

Marilyn Parker, secretary of the Ruddington Branch of the RBL, said ‘Being able to mark the completion of the restoration work exactly 90 years to the date since the Memorial was first unveiled is a very fitting way to remember and commemorate all the Casualties of War from Ruddington. It is particularly important that the Memorial has been restored to its former glory as 11 November 2014 will mark 100 years since the start of WW1.’