Ruddington’s War Memorial commemorates village residents who were killed in the First and Second World Wars, and the Korean War. Scroll down the page to read the Roll of Honour. The memorial is next to St. Peter’s Churchyard on Church Street and is maintained by the Parish Council. Visit our History section to find out about the history of the War Memorial. 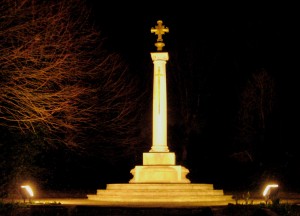 On the Sunday nearest to Armistice Day, the uniformed groups in the village parade from The Green to the War Memorial, where wreaths of poppies are laid. A short service then takes place at the War Memorial, followed by Morning Service at St Peter’s Church. Roads in the village are closed for the parade, so residents are encouraged to walk to the service. Details and timings are usually announced in the November issue of the The Rudd.

‘We will remember them’