Ruddington Groundsmen Chris Churches, Scott Evans and Steve Mills were the recipients of yet another award recognising their work to provide top class sports facilities for village football teams.

The award of the Alan Craven Trophy comes on the back of the well-deserved runner up in the National, and winner of Nottinghamshire, Groundsman of the Year Award 2014.

The trophy was presented at the Notts County Social club by Ruddington Village Football Club at their annual presentation evening at the end of June. 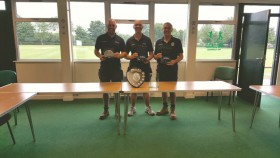 The award, originally bequeathed to the Club by former Chairman Alan Craven, is intended to recognise those who have made significant contributions to the welfare of the club and whose good works have been highly regarded by club Post Holders and team Managers.

Nominations having been put forward the winner was decided by vote.

Manager Joe Dunstan commenting on the award said, “This award to the parish groundsmen is well deserved, the pitches are top quality and arguably the best in Nottinghamshire. Co-operation between team managers and ground staff has reaped dividends and gone a long way in ensuring continued success for the club as a whole.”