The first ever Ruddington “Winter Beer Festival” has been “ale-d” as a success by its organisers.

“Ruddfest” returned within a marquee erected in the White Horse Beer Garden on the 27th and 28th December and also featured a bar and food stall run by The Three Crowns. Both bars had a varied selection of more than a dozen real ales, ciders and comestibles. Despite the cold weather the event was well attended. 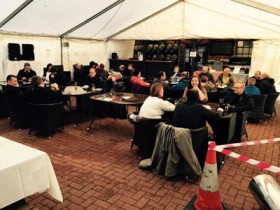 A large heater/blower kept the marquee surprisingly warm on a chilly weekend and there was “live” music on both the Saturday and Sunday.

“We think the icy conditions kept away some people from further afield but we got enough support from within the village to make it worthwhile”  explains White Horse landlord Andy Hunt.  “So Max, John and I are definitely planning to do the same again just after Christmas THIS year”.

Meantime thoughts are turning to the next “Summer Beer Festival” which proved such a hit in 2014 and featured a large marquee on the village green and extra real ale bars in four of our village pubs.

“This year we’re hoping to do an even bigger event with ALL Ruddington’s pubs involved if possible” says Andy “and it’s most likely to run from Thursday 28th to Sunday 31st of May.”

A meeting is taking place on February 2nd to firm up the plans – so watch this space!