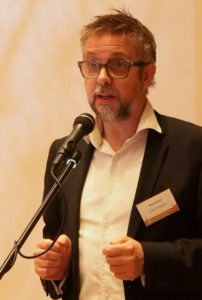 Paul Baker, who managed the Framework Knitters Museum on Chapel Street for the last five years, moved on to pastures new at the end of November 2016. His half decade tenure saw the museum embarking on an impressive journey that’s gained it both national and international recognition.

With Paul at the helm what was once a small village museum has been transformed into an internationally renowned, multi-award winning visitor attraction. Says Paul, ‘When I started the role in 2011 I could not have imagined the journey we have since taken. I’ve really enjoyed my time here, and am immensely proud of what the museum has become.’

Key achievements for Paul and his team included securing £100,000 worth of funding to create the first museum gallery dedicated to the Luddite uprising, and a unique new educational programme. The latter included the production of an interactive film called Breaking the Frame, which has helped the museum win a host of prestigious accolades, including the coveted Sandford Award and a European Heritage in Motion Award in 2015.

The museum was also recognised by Visit England, who made it the first museum in Nottinghamshire to receive the Best Told Story Accolade in 2016. And thanks to the European award, Paul was also invited to be a laureate at the 2016 Best in Heritage IMAGINES Conference, a highly regarded international conference that showcases the best in the museum and heritage field from across the world.

Paul continues, ‘I’ve been blessed with an incredible team of staff and volunteers who have embraced this period of change and growth and have provided me with outstanding counsel and support. The many accolades we have received and the growth in visitor numbers are all consequences of the dedication and hard work put in by my team.’

Paul’s replacement, Nicola Wood, took up her role as Manager/Curator in mid-December 2016. She joins the Framework Knitters Museum from Erewash Museum, where she worked as Museum Service Manager for almost 7 years, and in other roles there before that.

With Nicola at the helm, there are sure to be exciting developments at the Framework Knitters Museum in the future, so keep an eye on www.frameworkknittersmuseum.org.uk for the latest news and events.