Organisers of our new Ruddington Village Market say they were “gobsmacked” by the number of both villagers and visitors from further afield who turned out for the inaugural event on Saturday 2nd February.

They estimate over 2,000 people braved the icy conditions to see what the new monthly market at The White Horse Inn had to offer. A queue began to form even before the ribbon cutting at 9am for the official launch – with the first 10 punters through the gate claiming their free cotton carrier bag especially designed for the market. 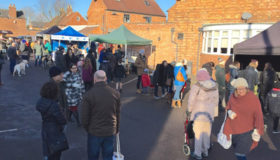 The astonishing turnout meant that, within the first two hours, many of the food stalls had just about sold out – and had to rush in extra supplies where they could. Many visitors then continued their “Ruddy Good Day Out” in winter sunshine with a stroll down Church Street and High Street to visit our shops and cafés, too. This is exactly what Ruddington Village Centre Partnership (RVCP)‘s “Market” team had hoped would happen when they joined forces with the popular pub to try to increase footfall to our village centre.

RVCP Treasurer Stella Dickie, who’s leading the project, said: “I’m amazed, and couldn’t believe the queue at 9 o’clock this morning before Andy and I cut the ribbon! I expected peaks and troughs, but it was a steady flow right through, with many stall holders cleaned out before the end, so everyone’s been really happy. 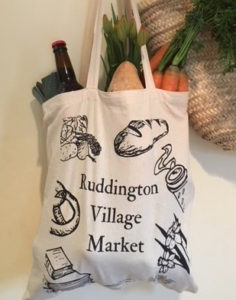 The market has been months in the planning by Stella and her dedicated team of volunteers – to ensure that it could attract a good range of traders able to provide the variety of produce, food and crafts needed – and also be effectively promoted beforehand. After publicity via RUDDINGTON.info, setting up its own dedicated website and social media pages, and distributing thousands of flyers throughout the area, it seems everyone’s hard work has paid off!

White Horse landlord Andy Hunt had been thinking about using his premises for a Farmers’ Market for quite some time: “It’s way exceeded anything I would have been able to organise on my own” admits Andy. “With the help of Stella and the RVCP committee it’s been fabulous, and I wouldn’t have been able to do it without them. When you put something on for this village they usually come out, but nobody expected the numbers that we got today. It was just phenomenal!

“We want it to be a village enterprise for the people, and to help other retailers, and we’re just glad that The White Horse can facilitate it. Thank you to everyone that came out and supported it.”

There’s now little doubt that Ruddington Village Market will become a monthly fixture – on the first Saturday morning of each month – perhaps with an additional quarterly Craft Fair, too.

RVCP Chair Mike Ader said: “I’ve talked to most of the traders and they seem to be really, really thrilled – saying it’s one of the best markets they’ve been to – so we’re all delighted, and we can’t wait for the next one at the start of March. Thanks to all our residents, visitors, volunteers, stall holders and all the other people who’ve been involved in making it such a great success.”

The date for your diary for the NEXT Ruddington Village Market is Saturday March 2nd from 9am to 12:30pm.