The Leader of Rushcliffe Borough Council, Cllr Simon Robinson, has praised another successful visit of the AJ Bell Tour of Britain national cycle race to the borough. The event on Thursday 8th September saw thousands of residents and visitors welcome and embrace the race. 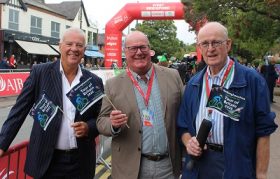 Highlights included droves of school children welcoming the riders donning Robin Hood hats and waving Tour flags as the peloton dashed through Rushcliffe’s urban and rural areas in a wave of colour and entertainment – all broadcast live on ITV4.

Cllr Robinson praised the Rushcliffe communities across the route for entering the spirit of the race with decorations and celebrations in place welcoming the world’s top cyclists.

He said: “It’s been another wonderful day for the borough. Thank you to people in so many of our towns and villages for giving a very warm Rushcliffe welcome to the Tour. I know race organisers were again delighted at the response of so many residents, businesses and visitors to the country’s largest free outdoor spectator event.

“In partnership with the Tour, the County Council and other local authority partners, the reason we invest in bringing this sporting spectacle to the borough is there for all to see.

“It’s the excitement, interest and focus it brings to so many of our communities and, crucially after such tough recent times, extra footfall to businesses.

“I’m sure the race’s visit will again be worth six figures to our local economy. This, matched with the impact of how our towns and parishes engage with the event with their noise and colour, is why we as a Council bid for the race that brings so much positivity to Rushcliffe.”

It’s the third time the showpiece event has taken place in the county, following equally successful stagings of the race in 2017 and 2018.