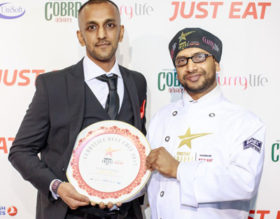 Ruddington STILL has the “Best Indian Chef in Nottinghamshire” – for the second year running! Monaim Choudhury of The Three Spices on Easthorpe Street received the accolade AGAIN at the “Curry Life Awards 2017,” organised by Curry Life Magazine.

He learned the good news during a glittering ceremony at The Royal Lancaster Hotel in London on Sunday 22nd October when he received his second, special plate. Three Spices owner Mahbu Noor was also there to hear the announcement and collect the prestigious award.

Monaim says: “This is my sixth year working here as Head Chef. The quality of the food and the quality of the service that we provide – this is the reason we keep getting customers coming back.”

Mahbu adds: “What a night! We would like to take a moment to say thank you for all the ongoing and overwhelming support we have received!”

This year, the ceremony was hosted by veteran TV presenter and journalist Michael Buerk, who presented Monaim with his award.