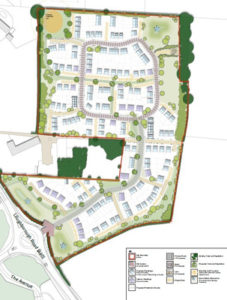 This site, off the Mere Way Roundabout, is one of the Green Belt development areas earmarked in Rushcliffe Borough Council (RBC)’s Local Plan Part 2 which was formerly known as RUD13. RBC’s plan suggests 170 new homes to fulfil its quota on this land, which is slightly less than these proposals are suggesting.

Some may also think the William Davis application is a little premature since the Government’s Planning Inspectorate is still deciding on the “soundness” of the Plan following its public hearings in December. This may be why no deadline for submitting comments has yet been stated. It’s one of four sites which could imminently be removed from Ruddington’s Green Belt – to build an eye-watering total of 525 homes on large swathes of agricultural land surrounding our village.

The latest Concept Plan shows very little change since the original document on which the public were consulted. It suggests how its houses might be arranged around the odd shaped plot – which borders Balmore Country House residential care home on three sides. It still shows no provision for a previously mooted future access through to Flawforth Lane, although it does promise a “potential pedestrian link” to the “adjacent potential development” as well as another footpath out to the A60. 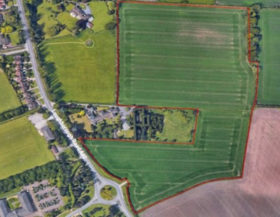 The plans drawn up by Pegasus Group on behalf of William Davis suggest affordable homes within the proposed mix of housing include flats, older persons’ housing and family homes. Also included are areas of public open space, landscaping and children’s play areas, and “…strengthening of existing hedgerows to protect the character of Ruddington’s Conservation Area and provide a strong landscape structure within the site.”

The property developer states: “William Davis considers that this site offers the opportunity to help deliver future housing requirements in a sustainable way in line with the aspirations of Rushcliffe Borough Council.”

All the documents associated with this outline application (numbered 19/00535/OUT) – and your opportunity to comment on these plans – can be found in the Planning and Building section at www.rushcliffe.gov.uk.