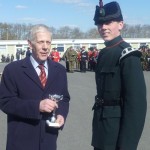 Senior Bugle Major James Murdock from Nottinghamshire Army Cadet Force enjoyed a successful Cadet Force Music Camp at Altcar, Merseyside during the Easter Half Term. With over 370 cadets from England, Wales and Northern Ireland on the camp, the cadets receive expert musical tuition and take part in other ACF training, including shooting, sports and archery. As well as taking their ACF music tests, cadets have the opportunity to take BTEC (Music), a qualification equivalent to four GCSEs.   James, from Nottingham, a student at NCN Basford Hall is being presented with the prize for the best 4 star Cadet by Brigadier (rtd) Mike Wharmby, Chairman ACFA. He will be using the musical skills learnt at camp with the Robin Hood Rifles Nottinghamshire Army Cadet Force at Ruddington on Tuesday evening 7.00 pm to 9.00.pm
If you would like to join as a Cadet or Adult Instructor please Contact Bugle Major Russ Jones 07739563588 for further information.