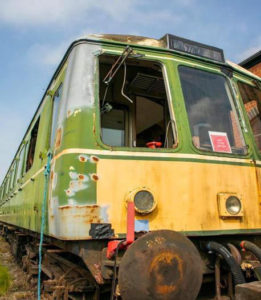 Volunteers at our village heritage centre have estimated that the attack – reportedly involving around half a dozen young people who smashed a total of 112 windows on various items of coaching stock and two diesel railcars – will cost around £80,000 to repair. They were then disturbed by a volunteer and are believed to have fled on bikes toward Rushcliffe Country Park. It has prompted dismay and anger across our village and in the wider museum community. You can read more at the RUDDINGTON.info website.

Two boys, aged 12 and 14, were arrested on Wednesday 1st May on suspicion of criminal damage. They have been released on conditional bail and the police investigation continues.

Rushcliffe Police Inspector Craig Berry has become personally involved in this case after telling RUDDINGTON.info he was “appalled” to hear of the incident, and pledged to identify the culprits and bring them to justice. 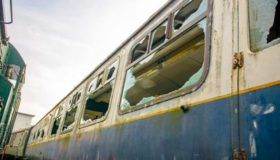 In an update today (Thursday 2nd May) he says: “I would like to express my thanks for all the public support around this investigation. As a result of a number of crucial witnesses coming forward Nottinghamshire Police have made two arrests. Although the investigation is still in its early stages this is a significant step forward and we will continue to follow up enquiries to identify all those involved.”

He emphasises: “It is important that anybody with any information still reports this to the police on 101 quoting number 19*217965. Extensive criminal damage occurred at 6.45pm on Monday April 29th and there was a group of approximately six young teenagers involved who may have been riding bikes. If you live or work in this vicinity, and have CCTV cameras, my request is that you check whether you have captured this group on camera between 5pm and 7pm on Monday 29th May.” 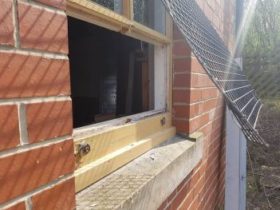 GCRN Director Phil Stanway says: “We will not be broken!” After railway volunteers worked around the clock to clear up the mess, and fix some of the damage, it’s been announced that it will be ‘business as usual’ there from this Saturday 4th May! “We will be open as normal to the visiting public this coming Bank Holiday Weekend and all scheduled services will run as booked. D5830 will haul services on the yellow timetable on Saturday whilst on Sunday & Monday, Steam Services will be hauled by Austerity 68067. We hope to see you over the weekend here at Ruddington.”

An official fundraising page called “We will not be broken” has now been set up by LNER(GC) Heritage Trust to raise money towards the massive cost of repairs following the vandals’ attack on Monday night. All donations will be gratefully received via either the Virgin Giving page or via Paypal.