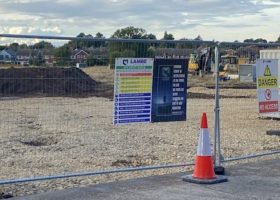 Residents along the southern side of Musters Road and Western Fields have something new to watch from their back bedroom windows – the disappearance of the open views they have enjoyed ever since their homes were built.

Thanks to the Coronavirus, these householders have actually had rather longer to continue enjoying their green fields and wildlife than the property developer intended – since its imminent groundworks and construction were abruptly halted by the lockdown in March. However, to some residents’ chagrin, this was not before a sizeable section of mature hedgerow alongside Asher Lane had already been controversially removed and a mature Ash tree originally included on plans for the site was unexpectedly facing the axe.

Now, with COVID-19 restrictions eased, and with such concerns seemingly brushed aside by Rushcliffe Borough Council officials, the above photograph (taken by Toni Whittaker) shows the access created from Asher Lane where the earth moving machines have finally moved on to the former Green Belt site. The doomed ash tree can be seen in the centre of the picture. This is even though the official access is from Musters Road (another controversial decision!) where the former number 75 has just been demolished to create a gap for the vehicular route all future residents here will have to use.

The Asher Lane development is the first of four brand new major Ruddington housing estates granted permission within the remit of The Rushcliffe Local Plan Part Two and was an especially controversial one – probably the most fought against by villagers. After initially being refused by the Borough Council, it received approval for 175 dwellings only after an appeal to the Government Planning Inspectorate by the original landowner in 2018. 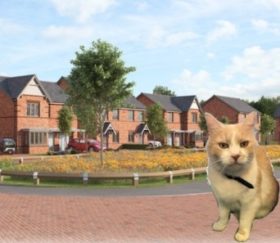 Since then, Avant Homes has been trying its best to win people over to the idea – not least by naming its new estate “Wilbur Chase” in homage to our now renowned Ruddington feline. Regardless, it’s certainly unlikely to have any trouble finding enough takers for these houses – as property buyers clamour to secure a home within our highly sought after village.

Managing Director for Avant Homes in the Midlands, Tim Brickley, told RUDDINGTON.info: “After demolition of the vacant, residential property on Musters Road, the initial groundworks at the site have commenced. The sales and marketing suite at the development is due to open before the end of the year – with the first homes expected to be ready for occupation in Spring 2021.”

He adds: “All access routes have been agreed with Highways and we will continue to keep you informed of progress throughout the build programme.”

One things’s for sure. Existing Ruddington residents will be keeping a careful watch on this, and other new building projects, to try to make sure the property developers at least live up to their promises.