It seems the antisocial and criminal behaviour of a minority will once again impact our wider community after it prompted a decision by landowners to close and secure access gates to premises which had been left open for villagers’ and visitors’ convenience for almost two decades.

As of Easter Monday, following advice from Rushcliffe Police and Nottinghamshire County Council, two of the three security gates onto the private section of Asher Lane have been padlocked again, meaning visitors must now contact properties beyond them in order to be let in and out. A third gate, allowing access to Premier Pets Hotel, will only be left open during business hours. 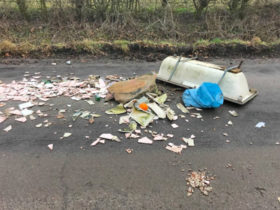 This unadopted stretch of road has always been private – with notices clearly stating that all vehicle access is to premises only – but gates have generally been left open for ease of entry and exit for the last 17 years. However, after a string of recent incidents, businesses and residents have reluctantly agreed that locking the gates to enforce this restriction has again become necessary.

A spokesperson for Premier Pets told us: “The antisocial behaviour we are experiencing includes fly tipping, the taking of drugs, and the racing of stolen cars, to name but a few. We fully support our neighbours in their decision, and now the first access gate will only be left open between 9am and 1pm then 3pm to 6pm, when we’re open.”

The owners of most of the land accessed from the private road, which includes two farms and five residential properties, have told RUDDINGTON.info that they have not taken this decision lightly. More serious criminal activity and antisocial behaviour have precipitated their move. Recently a whole bathroom suite was deposited along a private section of Asher Lane. 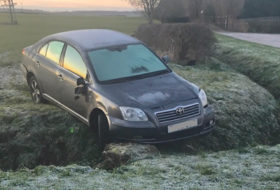 Fridges, freezers and other household waste have also been fly-tipped there, and even sheets of hazardous asbestos dumped in a field of crops. Illegal hare coursers and their dogs have been spotted in the fields and “joyriders” in stolen cars have also been plaguing the area – driving through farmland and breaking through fences in fields containing livestock. The repairs and substantial clearing up costs after such incidents are all at the landowners’ expense.

Added to this, since the introduction of a £1 fee in the official car park in 2017, many Rushcliffe Country Park visitors have now started accessing Asher Lane from Loughborough Road and also parking without permission along the private part of the road, causing damage to the verges. The road surface is breaking up in places due to excessive use. However, it’s being stressed the public footpath is not affected by the gates being locked and that walkers and cyclists are still most welcome to pass through.

PCSO Kathryn Lucock, of Rushcliffe Police, told us: “We are trying to make people aware of this, as people are used to driving around the perimeter road as a short cut in the mornings and to walk their dogs. The gates have been out of use for many years but it has become necessary to reinstate their use due to an increase in ASB and criminal activity in the area.”

If you see anyone acting suspiciously around our village you’re asked to call 999 immediately. You can also pass on any information you may have to Nottinghamshire Police on 101 – or by calling Crimestoppers anonymously on 0800 555 111.