Nationally the Government agrees the number of new houses it thinks needs to be built. It then ‘shares out’ the need for new houses to councils across the country. Rushcliffe Borough Council (RBC) has been given a number and had to decide where in Rushcliffe the sites for these new houses should be.
RBC has done this, gone through a consultation process and the decisions are in the ‘Core Strategy (Phase 1)’. 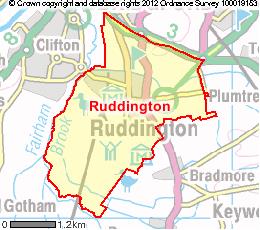 As far as Ruddington is concerned RBC has identified brownfield sites where up to 305 houses might be built. In addition to that, RBC decided that site(s) for at least 250 more houses in and around Ruddington need to be found on top of the brownfield sites already identified. This would be on what is currently Green Belt land.

The next stage of the Core Strategy (Phase 2) has already been consulted on and the results should be out in 2017. This will allocate certain parts of the current Green Belt to allow houses to be built.
To change what has already been agreed (Phase 1) would mean that RBC would have to go through the consultation process again. It would also, clearly, mean going through the consultation on Phase 2 again if Phase 1 changed a lot.

Unless there is a significant change in circumstances it would be very unusual – but not impossible – for a council to do this.