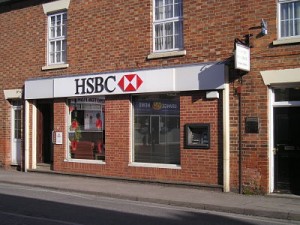 After a century of trading in the village, HSBC has announced it is to close its Ruddington branch on High Street at the end of April.

The shock announcement was made in a letter to its personal and business customers, advising them that their accounts will be transferred to West Bridgford. It blames the closure on “the growth of alternative methods of banking such as telephone and internet” meaning that “current use of the branch is such that it is no longer commercially viable”.

Local residents and businesses who rely on the branch are flocking to sign a petition against the closure which has been launched by Sarah Eborall of Ruddington Travel. It achieved 300 signatures in just the first week.

If the bid to save HSBC is unsuccessful, the Ruddington office will close its doors for the final time at 3pm on Friday 30th April, ending over 100 years of service to the village. 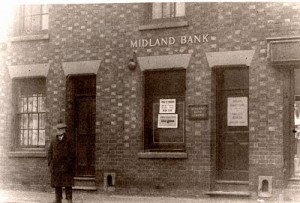 The earliest trading record of the former London City & Midland Bank in Ruddington, is December 1908. It is thought the branch was then located at the corner of Kempson Street, where the Conservative Club now stands. This is an early photograph of the bank at its current location (date unknown).

Thanks to Sue Dawes at HSBC for her help and thanks to Graham Wright for researching and writing this article.