The Frame Breakers will be holding it’s first-ever beer festival from Friday 8 April to Sunday 10 April. Since reopening under the ownership of Nottingham Brewery in October 2015, the pub is fast establishing a great reputation for the quality and range of its keg beers and hand-pulled ales, so holding a beer festival felt like a natural step. 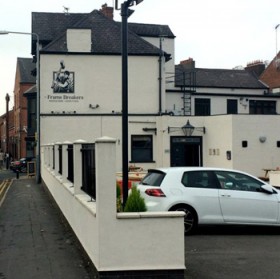 Andy Heath, Operations Manager at Nottingham Brewery, explains: ‘As our customers will know, quality real ales are a big part of life at The Frame Breakers. Holding a beer festival gives us the chance to offer an even wider selection than normal, including some more unusual choices that you don’t often find. Craft ciders will also be much in evidence, building on the success of our 5-tap cider wall which features craft ciders and perries from local providers and from further afield.’

The beers and ciders available to drink at the festival will also be used to create a special food menu, reflecting The Frame Breakers’ tradition of using Nottingham Brewery ales as ingredients. Current menu items include a hugely-popular stout and chocolate cake, and sausages made with a range of brews including cider, stout and EPA. These are specially made for the pub here in Ruddington by Julia’s Kitchen and Ruddington Village Butchers respectively, both on Church Street.

As well as food and drink, the beer festival will also feature an entertainment programme on the Saturday and Sunday. Says Andy: ‘We’ve not confirmed the details yet, but we’re hoping to have a Meet the Brewer event on Saturday 9 April, where the boys from Nottingham Brewery will be on hand to chat about their products and the different brewing processes. On Sunday, we’re hoping to have live music followed by a pub quiz and other games.’

Customers will also have the chance to get to know new Manageress, Amy, who joined The Frame Breakers team in March after previous Manager, Benjamin Zuchold, moved on to pastures new. Says Amy: ‘I’m very excited to be taking the reins at The Frame Breakers and have lots of exciting ideas to put the pub right at the heart of the village community in Ruddington. After our own beer festival in April, we’ll be looking forward to taking part in Ruddfest alongside other pubs in the village, from Thursday 2 to Sunday 5 June.’

For more information abo the beer festival at The Frame Breakers, please call into the pub or ring 0115 859 0060. You can find the latest information on Ruddfest at the events Facebook page, or look out for an article in the Village Newsletter next month.