Ruddington can now boast a new, independent estate agent and lettings agency – with the launch of Benwell Daykin at our former chemist’s shop at 12 High Street.

Since RUDDINGTON.info revealed last October which business would be taking over these historic village centre premises, the necessary permissions were obtained and a total refurbishment carried out in readiness for the official opening of the fresh and vibrant offices on 6th January.

Co-owner Ricky Benwell, who grew up in the village and is the driving force behind the new venture, says: “I’ve been an estate agent now for about 10 years, working for various businesses in the city, but thought the time was right to branch out on my own.”

That’s when Ricky sat down and had a conversation with family member Shaun Daykin, who has a background in financial services. “Shaun wanted to get into the property industry and I wanted to set up on my own, so we went into partnership – leading here, to Benwell Daykin” explains Ricky. 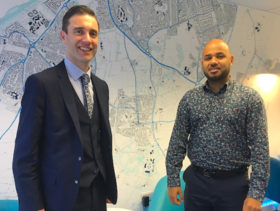 However, Shaun is set to be more of a ‘silent partner’ in the new enterprise, with Ricky working full time in the new Ruddington offices on lettings whilst Nick Aston (pictured above with Ricky) will be the sales valuer. “Nick’s got over 18 years’ experience in property – I worked very closely with him at a previous employer for six and a half years – and I don’t just regard Nick as a colleague now but as a friend” says Ricky.

“We’ve been well received in the village so far, with a growing number of appointments in the diary, and we’ve also found the traders in the shops around us have been very welcoming and willing to help, so that’s been great.”

In turn Benwell Daykin is keen to support other Ruddington businesses – having already installed the new ‘Cloud’ VOIP Telephone System launched by WigWag.

Ricky is already well known in our village as a footballer – having been part of the Ruddington Village FC team who were Notts Senior Premier Division Champions for 2015/2016.

Even before the official branch opening, Benwell Daykin received some celebrity endorsement from former Nottingham Forest player, Julian Bennett: “We assisted him in finding some new tenants for his property in Ruddington, he was very happy with our services, and sent Tweets recommending us to his 10,000 followers – so we’ll take that!” laughs Ricky.

He adds: “There’s plenty of business to go around for another Estate Agent and Lettings Agency in Ruddington, which is one reason we came to the village. Our prices are competitive and everyone should have more than one option to choose from. We’re now here and it’s all been very friendly so far! So, whether you’re buying, letting or selling, just drop in for a cup of tea or coffee and a general chat and we’ll see what we can do for you”.