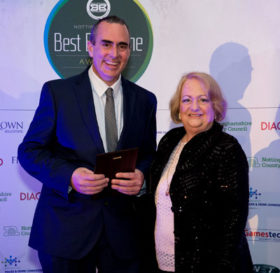 The Country Cottage Hotel on Easthorpe Street has been recognised as one of Nottinghamshire’s top venues for the second year in a row. The hotel proudly scooped the ‘Judge’s Choice Award’ for Rushcliffe in the 2016/17 Best Bar None Nottinghamshire Awards – repeating their 2015/16 success in the same category.

Presented at an exclusive ceremony in Papplewick on Tuesday 28 February, the award recognises the high quality of the operational and staff training procedures at the Cottage. The panel of independent judges – all experts in the licensing field – were particularly impressed by the amount of charity work undertaken by the hotel’s owner, Andrew Sturt. 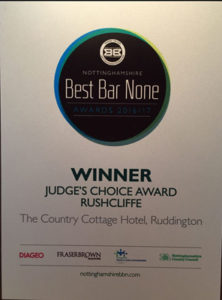 Andrew, who runs the hotel with his mother, Julie Sturt, said: ‘We’re super-proud of winning the “Judge’s Choice Award” for the second year in a row. Thank you to everyone who took the time to vote us into the shortlist for 2016/17…long may it continue! The biggest thanks are, of course, due to our amazing team for all the hard work they put in to make The Country Cottage such a popular, well-run and safe place for all our guests.’

Best Bar None is a national scheme, which runs in 30 individual areas around the country. The scheme encourages pub, club and venue licensees to improve their operational and safety standards, leading to an impressive reduction in alcohol-related crime and disorder in some areas. The Country Cottage is one of just 12 Best Bar None-accredited venues in Rushcliffe.

Congratulations to Julie, Andrew and all the team on your continued success!