On Friday 3rd November, Nottingham Forest players Chris Cohen and Danny Fox attended the Bloomin’ Dementia hub at 4 Easthorpe Street to help raise funds for both the Ruddington-based charity and the Just for Stan initiative. The latter exists to raise awareness and support for former Forest, QPR and England legend, Stanley Bowles, and his battle with Alzheimer’s disease.

Reds captain and midfielder, Chris Cohen, who lives in Ruddington, spoke wonderfully about his own journey of awareness about dementia. Chris’ grandparents both live with the condition, and he explained to BBC reporters and other media present how profoundly this has affected his parents and wider family. 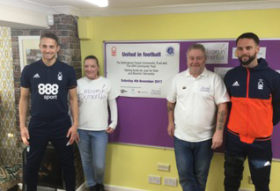 The next day, Nottingham Forest included a piece encouraging donations to the two charities in their match day programme, when the Reds played QPR in The Championship. Further fundraising activities will follow when the reverse fixture takes place in London next year.

Bloomin’ Dementia got a lot of “air time” over the weekend, resulting in many requests for advice and information. Pleasingly, the charity also received numerous offers of help and support.

Fundraiser Andy Hallam said “It’s amazing how many people have come forward and shared their experiences of trying to cope with someone with dementia. The need for the charity is there for all to see – but so is the goodwill”.

This is great news for Ruddington and we look forward to further news from this go-ahead group.