2015 is set to the ‘The Year of the Bridge’ for Great Central Railway Nottingham (GCRN) as their appeal to raise funds to build a new bridge steams ahead towards its £1 million target. Currently standing at over £730,000, the Bridge to the Future Appeal is raising funds to build a bridge over the Midland Main Line so that the Ruddington and Loughborough sections of the Great Central Railway can be joined together – creating an unbroken 18 mile stretch of heritage railway.

The two railways were originally part of the Sheffield-Marylebone Great Central Railway, which opened in 1899. The new bridge will form part of works to close a 500m gap between the two lines at Loughborough, enabling steam trains to travel down a section of the GCR line that’s been closed since the 1960s. 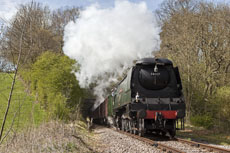 Work on the new bridge will start in spring 2015 and should be completed by the autumn. GCR Loughborough and GCRN are working closely with Network Rail on the project and have recently agreed a new design which will see a brand new 30m bridge deck being built. To complete the unification works, another new bridge will have to be built over Railway Terrace in Loughborough and 300m of embankment will need reinstating.

Speaking to the Nottingham Post, Director of GCRN, Alan Kemp, said: ‘2015 will be an exciting time for what we believe is one of the most high profile projects in national railway preservation. However, we can’t be complacent and we urgently need to raise the remaining amount required to reach the £1 million target. Although there are further major works needed and more funding to be raised, I look forward to trains running across the completed link before the end of the decade.’

For more information about the project or to make a donation, please visit www.gcrrailway.co.uk/unify.