A project to connect up two sections of heritage railway moved a step closer to reality on Sunday 3rd September, when parts of a bridge were moved into place by a 1,000-tonne crane. 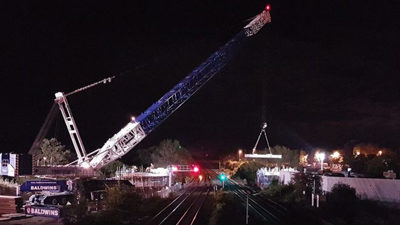 The £2.5m project will involve reinstating some 500m of missing embankment, track and bridge. The first phase of the work on 3rd September saw two steel beams being put in place for the new bridge, with the decking being added later.

When the bridge is complete, it will enable GCRN and GCR to join their lines together and create a new 18 mile route connecting Leicester with Ruddington, via Loughborough.

Phil Stanway, director of Great Central Railway Nottingham, commented: “What was once deemed nothing more than a dream moves one step closer. The bridge installation is testimony to all who have contributed so far.”