Early in 2011 Ruddington celebrated the reopening of its only dedicated butcher’s shop at 15 Church Street by new owner Stewart White and his shop manager Shane Ginty.

Four years on the business has gone from strength to strength and regained the sort of customer support built up over 64 years by the Oliver family up to David’s retirement from the premises in 2000. 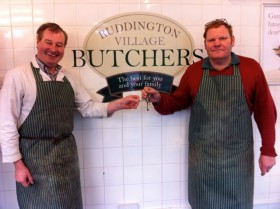 NOW another change has taken place! On Monday 16th February Stewart handed over the keys to new owner Shane – who will now run the shop mostly on his own but with a little help from wife Nicola.

“I’ve chosen a new life in St Helen’s to be with my girlfriend and I’ll be taking a break from butchery for a bit” explains Stewart. “For now I’ll be working for Tesco Distribution in Bolton. I did have another offer for the business but I chose Shane to continue running it as I thought he’d be the best bet to continue a successful butcher’s shop in Ruddington.”

“I’m very excited to be taking over” beams Shane. “It’s already a really nice shop, so I won’t be making many changes, but I will be expanding the range a bit and offer food tastings on Fridays and Saturdays!”

Another thing to note is that Ruddington Village Butchers will now be closed on Wednesdays – but it is still open on all other days except Sunday.