On Sunday June 29th a convoy of 3 coaches left Nottingham bound for Ostend, Belgium carrying a large contingent of 78 Army cadet musicians with British Legion members and other supporters including Parish councillor Peter McGowan. The Ruddington Corps of Drums had been joined by others from Yorkshire, Shropshire, Leicestershire, Rutland and Northants in memory of this 100th anniversary of the start of WW1. Peter brought with him three parish wreathes to lay at important memorials.

The first visit on Monday was to the Tyne Cot Cemetery, the largest in the world maintained by the Commonwealth War Graves Commission. Wreathes were laid and the cadets played the Last Post and Reveille at the lowering and raising of flags. Other visits that day included the Passchendale Museum and a German bunker. Tuesday saw the contingent visit the town of Foncquevillers in France. It was from here that The Sherwood Foresters left to take part in the first day of The Battle of the Somme on July 1st 1916 and many of their dead were buried in the cemetery. The unit, in full dress uniform, paraded through the town to the cemetery to lay wreathes.

A reception was provided by the Town Mayor afterwards and then the coaches returned to Ypres in Belgium to prepare for the main event of the trip. This was to parade through the Menin Gate at the evening event of wreath laying – watched by hundreds of visitors to this famous event. After the ceremony the buglers repaired to the ramparts to play. 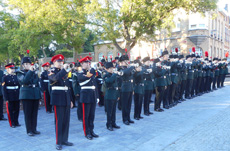 Wednesday saw visits to sites such as the museum at Dikesmuide, The Trench of Death, The Yorkshire Trench System and the Essex Farm Cemetery site of the hospital where Colonel John McCrae served as a surgeon and wrote the famous poem ‘In Flanders Fields the Poppies Blow’.

Thursday provided an opportunity to relax and wander around Ostend before the return home on Friday. “The musical performances were impressive and the cadet’s behaviour impeccable and an example to all of today’s young people” said Peter.

The Ruddington Cadets make this visit every year although not in such large numbers. Every Tuesday evening the cadets meet at their hut on Loughborough Road near to the Jubilee Clubhouse entrance, why not pay them a visit?