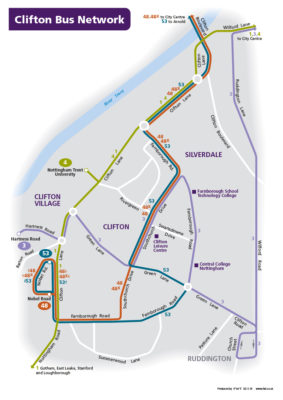 Village residents who travel by bus will be pleased to hear that Nottingham City Transport (NCT) are making some improvements to their number 3 service from 29 January 2017. The 3, which links the city centre with Wilford and Clifton, was re-routed via Ruddington after Trent Barton’s Ruddington Connection service was withdrawn in November 2015.

The changes include a revised and improved timetable for the 3, with Monday to Saturday daytime buses increased to run up to every 20 minutes. In the evenings, buses will run every 30 minutes until around 8pm and – in a move that will please residents living on and around the Clifton Road section of the route – all Sunday buses will run through to Clifton instead of terminating in the village.

There will also be some amendments to the route followed by the number 3 in Clifton, as a result of changes in passenger behaviour since NET tram services were launched in Clifton last year. Both the route and timetable changes should make it easier for Ruddington residents wishing to use the tram to connect with stops in Clifton and Wilford.

The re-route will also provide improved access to the main shopping, leisure and health facilities in Clifton centre, as buses will stop at the main bus stop on Southchurch Drive.

For full details of all the changes, please visit www.nctx.co.uk/cliftonchanges.