On Saturday 20th April Ruddington showed itself to have a fantastic “Community Spirit”. 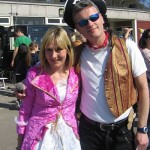 Parents/ carers, pupils and their families along with other local residents turned out in force to support James Peacock Infant and Nursery school with the Community Launch of the Stephen Lawrence Educational Standard Project that they have been working on at the school for the past six months. The aim of the ongoing project is to educate pupils from an early age  that everyone is important and to encourage respect for and understanding of others. 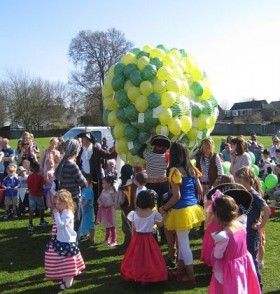 The sunny afternoon was full of attractions and activities provided by the school and various village organisations. The school grounds hosted African Drumming, the Community Choir, a Cheerleading display by the pupils and even a bootcamp, to name just a few. Everyone was invited to dress up as a pirate or a princess and adults and children alike did so including the Head, Mr Waldron and the lead teacher of the Project, Mrs Squires.

Thanks to the support of Artex, who have a base in the village, the event culminated in a Balloon Launch with each balloon carrying a message of hope.The first balloon to be released carried a personal message from the mother of Stephen Lawrence, Doreen, in which she expressed her hope that “We all see people as people”.   Within 36 hours of the launch the school had received a message from Lincoln where one of the balloons landed. Where will the other 299 land?  (By Barbara Breakwell)