When Rushcliffe Country Park opened in 1993, Keith Laing, a former coal miner, became its first Ranger. Two years later, he left to undertake various roles for Rushcliffe Borough Council before returning to the Park in 2005 as the Park Manager. At the end of April, he retired after 15 years in this role.

Keith wasn’t just a manager in terms of responding to the needs of the wildlife and thousands of human visitors, he was also a very active participant in the physical work needed to maintain the Park. 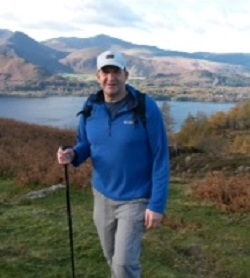 “An overriding memory of my time at the park is the great staff and volunteers I’ve worked with,” says Keith. “I’ve been very lucky to have had such hardworking passionate people around me. The volunteers who form the Friends of Rushcliffe Country Park work so hard in helping maintain the Park to the very highest standards.”

In the summer of 2011, unbeknown to the Friends, Keith nominated them for The Queen’s Award for Voluntary Service, the equivalent of an MBE. They were assessed and ultimately awarded the honour in 2012.

Another accolade that the Park has accrued is the Green Flag Award. Under Keith’s leadership, the Rangers and Friends first gained this award in 2007 – and they’ve managed to retain it annually to the present day.

The Park is also a popular venue for Parkrun, an activity Keith is proud to have helped to set up in 2012. Although his knees prevent him from running too often, he loves seeing the hundreds of runners turn up each week.

Keith also acknowledged the support he received from Rushcliffe Borough Council Managers and Councillors, who fully appreciate the benefits that the Park offers to Rushcliffe residents and visitors from further afield.

Keith said that he enjoyed most aspects of the job, both administrative and practical. He admitted the weather could be challenging at times, but the thing he disliked the most was rain!

Due to the pandemic, Keith couldn’t celebrate his retirement but there are plans to get together with his colleagues when possible. He received numerous gifts and cards, and was humbled by the comments in them.

His retirement will give him the chance to only be responsible for himself and he intends to spend lots of time walking with his dog, Meg. He is also volunteering in his home community of Cotgrave. Finally, Keith wanted to personally thank his wife Linda, whose support has enabled him to have such a successful career.

Happy retirement, Keith, from all in Ruddington!