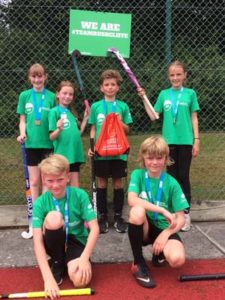 The School Games included 18 sports, from table tennis to lacrosse, and was attended by both primary and secondary school children representing each borough in Nottinghamshire. The opening ceremony included a talk from Joanne Jackson, the Olympic medal-winning GB swimmer, and a fantastic Samba band, who the St Peter’s children recognised from a recent workshop held at school (funded by the Friends of School).

The six person squad from St Peter’s started very strongly, winning both matches in their group and racking up an impressive 17 goals against schools from Mansfield and Broxtowe. They then narrowly lost their semi-final by two goals, but were victorious again against the Mansfield school, winning 6 – 0 and securing the bronze medal position. Isaac was also awarded a prize for Player of the Tournament.