Ruddington visitors and residents now have a brand new place for village centre shopping and socialising – on the site of the former Thomas’s Greengrocers’ storage building.

Following the granting of planning permission last July, work started in November to create the chic new retail area off High Street – which has been named “The Courtyard”, and runs to the rear of existing Church Street shops. 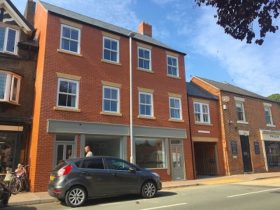 “We just thought ‘The Courtyard’ was an apt and prestigious name” says Brian Perkins of Victoria Properties, who were behind the ambitious project. “We are thrilled with the overall appearance of the development and believe it sits perfectly within its neighbours. The build was completed on schedule, even with bad weather and the pandemic situation, which is a total credit to the builder Whytemac Limited” continues Brian.

Although not all the retail units are occupied as yet, the gates are now open to allow the customers of Philo’s Delicatessen to use their new outside seating area and also to access Beautyworks by Lauren (the village salon run by Brian’s daughter) which has relocated and is already open for business.

There’s also a possible rear entrance to the Honeycomb Christian Charity Shop from here, should they decide to use it, along with two further new shops within the precinct and two more on High Street, next to The Bottle Top.

Additionally, two new office units and three flats are located within The Courtyard which will also soon be home to Benjamin’s Estate Agents, Jackson-Crane Architects and Zing Interiors.

Brian reveals the total cost of his development was a cool £800,000 – but believes it was money well spent! “We are a family business from Ruddington and we have a passion for our village to flourish, thereby supporting local businesses and creating a great local environment for residents.”

He adds: “Victoria Properties Nottingham Ltd would like to thank everyone for bearing with us during our project. Hopefully we can all work together to keep Ruddington a successful and wonderful village.”