Two village scoutmasters are undertaking some major fundraising challenges this year in the hope of raising enough money to replace their leaky, old asbestos roof.

The First Ruddington Scouts building off Ashworth Avenue accommodates around 120 young people aged 6 to 14 across Beavers, Cubs and Scouts. However Dan Clifford (“Falcon”), a leader at the Beaver Scout colony, says: “Our Scout Hut roof is over 30 years old and can no longer be patched up. Every time it rains, we lose about a quarter of our floor space in the main hall, which seriously impacts on the fun the kids are having. We’ve also got leaks around our equipment store, potentially endangering our valuable camping equipment.” 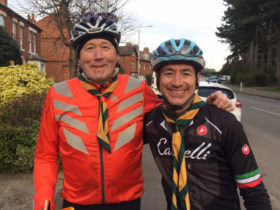 So now Dan, pictured above with fellow scout leader and cyclist Kerry Squires, AKA “Wolf” (in the orange top), have together decided to try to start raising some of the £20,000 needed to fix the roof.

“I’m doing three challenges in total and Kerry is joining me on the first one” explains Dan. “We’re cycling from Brownsea Island, one of scouting’s spiritual homes and site of the first Robert Baden Powell scout camp, to Ruddington – a distance of approximately 200 miles – in two days. The second challenge is the infamous Land’s End to John o’Groats, roughly 1,000 miles, from the tip of Cornwall to the top of Scotland, over eight days. I’ll be cycling from Cornwall to Ruddington on my own, but will be accompanied by Kate, my wife and our children on the remaining leg (they’re using a car rather than a bike!). My final challenge is to conquer the highest mountains in England, Scotland and Wales in a 24 hour period!”

The first challenge took place on 27th April and Dan hopes villagers will consider sponsoring them to raise the money: “Although the weather so far this year has been hampering my training, I’ve been racking up the miles in anticipation of the hard work to come!”

If you’d like to find out more – and perhaps help Falcon and Wolf in their fundraising endeavours – you can visit https://mydonate.bt.com/fundraisers/gowolfandfalcon.