Oliver Peckover was supported several years ago with a Parish Council grant for his cycling and was also supported through the County Council talent programme. He has gone a long way since then with the support of family and friends.

Ollie is 20 years old and has lived in Ruddington all his life. Over the years, he’s represented the East Midlands in multiple cycling disciplines, including three consecutive years at the UK School Games. Over the winter of 2014/15, he was invited to ride in the Revolution Track Series (a series of events on an indoor velodrome, held in London, Manchester and Glasgow) as an under-16 rider and was also asked to represent Team Sky. 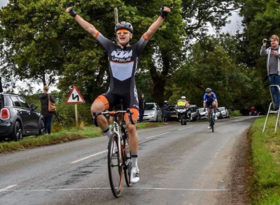 For the last two years, he’s been riding against professional riders all over the country, gaining some excellent results. In August 2018 he became the East Midlands Men’s Road Race champion after a 90 mile road race held in the Vale of Belvoir that included riding up Harby hill seven times.

Ollie also holds the course record on several local 10 mile time trial circuits. He then got a fantastic opportunity with a competition organised by Zwift (an online training programme) and Team Dimension Data (Mark Cavendish’s team), with the winner gaining a place on the Under-23 Team Dimension Data continental squad and a professional contract.

There were 29,426 cyclists enrolled worldwide at the start of the programme, of which only 3,267 completed all the tasks. After finishing all the training activities, including workouts, group rides and races over an eight week period, Ollie advanced to the semi-final stage after making it into the top 10 under-23 year old riders. Then commenced another two weeks of riding and testing to make it into the top three for the finals, which saw Ollie attend a Team Dimension Data training camp in Cape Town, South Africa, in November.

Whilst out there, he helped to distribute some of the bikes donated by the Zwift Academy to the Qhubeka Charity which was founded in 2005. The charity provides bikes to South African communities to enable residents to travel further and faster to places that are hard to access. Typical journeys include fetching supplies, travelling to school and work, visiting clinics and getting medical assistance or providing emergency help after a disaster – things we generally take for granted.

To date, the charity has provided more than 80,000 bikes to local communities. Zwift are donating one bike for every 10 people who graduated from the initial eight week training programme.

Unfortunately Ollie was unsuccessful in the Cape Town finals. However, he’ll carry on racing for a UK-based team during 2019 and hopes to go one step further next year.