Continuing the theme on famous people connected with Ruddington it is worth remembering that Nick Clegg used to live here. 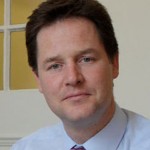 The Deputy Prime Minister reminded us of this fact when he spoke to an invited audience at Boots during his Nottingham visit. As well as tackling subjects ranging from the controversial Workplace Parking Levy to The Big Society he also said he was disappointed the government had had to postpone the widening of the A453 between Clifton and the M1. He told one questioner “I used to live in Ruddington so I know how you feel. We hope to sort it out one day.”
Indeed, the Liberal-Democrat politician used to reside at a property on The Green. This was Mr. Clegg’s constituency house during the period between 1999 and 2004 when he was serving as a relatively unknown MEP for the East Midlands. At this time he also ran the party office at 17-21 High Street.
He was sold the terraced property by Ruddington painter & decorator Adrian Hare. Adrian recalls “Nick Clegg was a nice chap – very polite and affable. I knew he was into politics but not much more at the time. I’d only put the house on the market the night before and he came, on his own, to look around it the very next morning. He told me that he really liked what I’d done with it – and by that lunchtime he’d bought it!”   (Researched & written by Graham Wright)