A VICTORIAN  DISTILLERY THAT WORKED ON BEETROOT 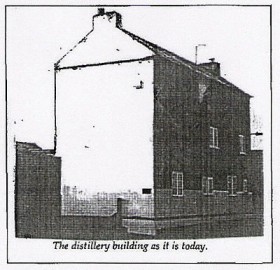 Derek Larkin writes:  ………….
“Ruddington is a village near Nottingham. It has a thoroughfare called Distillery Street which in the mid 19th Century boasted a distillery which used beetroot as its raw material for distillation.

From an 1858 farming magazine, the local History Society discovered that the plant was installed in 1858 but could only guess as to how long the distillery was active and asked me if I could find out more about it.

Ian Wright, the department’s archivist from New King’s Beam House, tracked down the distillery in official records and established that it closed in 1863 or 1864. This was useful information for the Society which was under the impression that it operated for about 50 years!

Further research established that the distillery was owned by the squire of the village, Sir Thomas George Augustus Parkyns. It was he who ordered the still invented by a Monsieur Leplay. The 1858 magazine described the process in detail, I summarise it as follows: The distillery worked day and night during the winter months employing 28 men and boys. The beetroots sent to the distillery weighed between 3 and 7 pounds each. They were thrown into a washing machine to get rid of the soil and then sliced. Fermenting vats were two thirds filled with water to 120 degrees Farenheit and sulphuric acid added. When the temperature dropped to 84 degrees the sliced roots were put together with a
small amount of yeast to produce fermentation.

The distillation process was ‘delicate and difficult’. It required an array of cylinders, brass pipes and a rectifying boiler. The spirit obtained was 60-70 degrees over proof. The discharge was make through a glass case kept locked by the Excise Officer and from whence the spirit passed into the receiver.

The manager of the plant, a Monsieur Crolard (was he connected with the French inventor in someway?) said that each ton of roots produced 12-14 gallons of spirit, but that it could rise to 20 gallons per ton. The beet residue was sold at 12 shillings per ton as cattle feed.

The distillery was probably not a spirited success, it closed down after 6 or 7 years. Sir Thomas George Augustus Parkyns sold his whole estate by auction and went to London to live on the proceeds!

Inland Revenue work schemes for 1863 indicate that the distillery was laid to Nottingham’s first station and run by an Assistant at Ruddington with other work.”