That’s the name of the new children’s soft play area which opened in Ruddington on the 5th of November.  ‘Dizzy Rascalz’ on Brookside Road is the idea of Amy Phipps who manages the new business venture with her mum Jeanette Pearson. 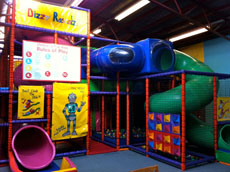 “I have a five year old daughter” says Amy “and there was nowhere indoors in Ruddington for her to go and play. So I thought I’d set somewhere up. Twenty months on we’ve finally done it! It’s been really exciting but we’re still finding our feet.”

“It’s for children up to around ten years old” explains Jeanette “The pink slide was the first thing to go in then we built around it – two more slides, two ball pits, a traversing wall, vertical and horizontal rollers, cooper cars – plus our separate Baby Area and Party Room.”

The cost for 2 hours is £3.50 for under 4s and £4.50 for older children. They emphasize it’s not a nursery but a fun play area where parents or guardians supervise their own kids. However there are 4 other staff to keep an eye on things and to serve a range of adult and children’s food and drink from Dizzy’s Bistro. Business has been good so far!

“We’re open every day until 6pm – Monday to Saturday from 9.30am and Sunday from 10am” says Amy. “Just come along and enjoy it!”