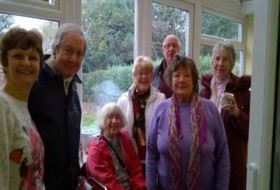 Four of the original trustees and others gathered to reminisce to that day when lots of prayer, preparation and planning culminated in the opening of No 3 Shop, (followed by No 5 some 6 years later). Originally a dwelling, leased from Mary Peach by Edith (affectionately known as Edie and Les Beavor, lots of hard work took place before it was ready to open as a business 30 years ago.

We are very proud that it began as an interdenominational venture, with people who simply wanted to show Jesus’ love for the community. We have seen many wonderful helpers serve in the shop over these 30 years, a number of whom are still involved today!

Honeycomb also has the loveliest and friendliest customers who have supported and donated to us over all these years and to whom we are most grateful.

So what will the next 30 years bring? Who knows???…. but we will gladly continue to serve the village of Ruddington and surrounding areas with the Joy of the Lord.