For decades the high volume of traffic using Ruddington’s narrow streets as a thoroughfare has been an issue for locals.  In more recent times some have also perceived a new problem – that many commuters now park up their cars in our village centre for free, all day long, whilst they catch a bus to work in the city.  If true, has this resulted in people visiting our village during the day being unable to park here – and going elsewhere for their shopping, business or leisure needs instead – robbing Ruddington of vital trade?
Thirty minute parking restrictions are already in force on High Street and part of Charles Street but not on other village centre roads nor the car park.  So how best to resolve the issue?  It seemed to be businesses on Church Street that were complaining about being the worst affected.  So, during June, I conducted a short survey of fifteen shopkeepers there to gauge their opinions. 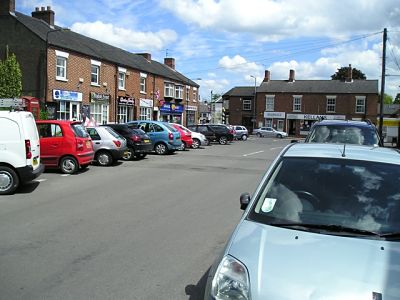 These are my findings:- 73% said they believe there is a problem with drivers from outside the village using Ruddington as an unofficial ‘park and ride’ – giving me anecdotal evidence of the same person taking up the parking space outside their premises each day to catch the bus.  (One woman admitted to living in the village but bringing her car into the centre to be nearer the bus stop!)  However less than half of respondents thought that the situation had been made any worse by the new city Workplace Parking Levy.
When the same traders were asked if they thought that either a two or three hour waiting limit should be imposed on all village centre roads and the Church Street Car Park* on weekdays from 8am to 6pm only 33% thought this was a good idea.  But this rose to 80% if some kind of all-day parking permit for village centre residents and business owners could be introduced as well.  An overwhelming 93% were against any kind of parking charges in Ruddington to address the problem.
Jeweller David Richards suggested “a separate car park for traders only – so that we’re not taking up public parking spaces”.  Keith Alton, owner of Grange News and Grange Bakery, agreed that there is a parking shortage and suggests turning part of Ruddington’s “under-used” village green into an extra car park.  Village resident Joy Clayton, who lives on The Green, complained that the roads around her house are “horrendous!” – clogged by parked cars on both sides.  She says many of these are left there all day by people catching the bus into the city – with their vehicles often blocking her exit as well as the passage of the buses themselves.  Another solution suggested to me was a dedicated ‘Park and Ride’ site at the Business Park for city commuters.
However David Birch from Optillion was surprised by all the fuss! “All our clients seem to be able to park here okay” he says.  “We don’t believe there is really a parking problem in Ruddington”.
(Researched and written by Graham Wright)
*Church Street Car Park is a Parish Council facility and does not come under NCC Highways responsibility.
NCC Highways has already expressed an interest in Graham’s survey.