Further to the success of the Copper’s Dog Activity Trail at Rushcliffe Country Park, a new dog training programme was launched at the park in January. At the time of writing, a three week pilot trial was underway, with 7 dogs aged between 8 months and 9 years attending with their owners. A second, six week programme begins on 1 February, with classes taking place every Monday between 11:30am and 12:30pm. 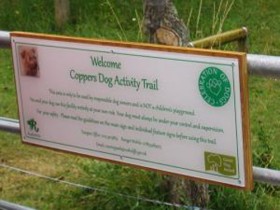 The classes, which are suitable for dogs of any age, are run by Gareth, an experienced trainer who works with Chalfield Dog Training club.

Gareth uses positive, reward-based dog training methods which involve training the dog using praise or treats. The teaching will focus on general skills that are useful for any dog, such as good recall and waiting for permission to approach other dogs – both essential for walking your dogs in public areas or off the lead.

Gareth and the Friends of the Country Park, who built the Copper’s Dog Activity Trail, hope the new classes will become a regular feature at the Country Park in the coming months. If you’d like to sign up, you can contact the Rangers at the park on 0115 921 5865 or email countrypark@rushcliffe.gov.uk. Note that future classes will probably be held at different times to suit as many people as possible, so please get in touch even if the February dates aren’t convenient for you.